Happy (almost) New Year, everyone! As we enter the last week of 2022, it’s time for me to get my sanctified behind into gear and start churning out these articles like ice cream, baby! I won’t attempt to make excuses as to why I haven’t published an article in 8 months (I’ve been so busy with my church, reading my Bible, praying, trying to lead lost souls/people to the Lord, being a full-time attorney and caregiver for my Mother, blah…blah…blah!); Yah (God) has been working on me, and I’m now back to stay (unlike the Bears in Chicago; trash! The Arlington Heights Bears sounds CORNY! No wonder we’re 3-12 this year. No offense to the Bears or to anyone who lives in Arlington Heights! Yahushua Hamashiach (Jesus Christ) and I love you! Haha.)! It’s a new year, a new beginning, and a new me!

If you all will recall from previous posts, the Israelites were Yah’s (God’s) chosen people (His homies! His homeboys! His buddies! His pals! His friends! His partners! His road dogs! His Day Ones! His…I’ll stop now.). The Lord CONSTANTLY showed the Israelites how much he loved them: he used Moses to deliver them from Egyptian slavery under Pharaoh (https://jesusbedtimestories.com/i-see-the-red-sea-pharaohs-a-weenie/); he used Joshua to help them defeat the Canaanites in war to conquer the Promised Land (quite literally the land that Yah (God) had promised to give them if they obeyed (listened to and followed) him->https://jesusbedtimestories.com/break-down-the-walls-of-jericho/); and he used several judges, including Othniel and Ehud, to help the Israelites defeat several powerful armies (all of whom outnumbered, outmatched and outpowered the Israelites BIG TIME) and expand their territory (https://jesusbedtimestories.com/ehud-the-pudgy-pinata-popper/).

Despite all that Yah (God) had done for the Israelites, they CONTINUED to disobey Yah (God), live in sin (say, do, not do, and think bad things that Yah (God) doesn’t like), and act like they didn’t have any home training (I wish I would’ve acted like a monkey in public with my southern grandparents; they would have torn my behind up, knocked me three ways into next week and recorded the thrashing to tell me about and remind me of myself. My grandparents weren’t violent! They were kind, loving, intelligent, compassionate, fun, hardworking, Christian role models! Rest in peace, Grandma and Granddaddy! I know that both of you are in Heaven with the Lord, smiling down on me right now!).

The Israelites had a few “Eureka” moments, however; when they started losing battles quicker than Larry King started losing hair and relevance (I’m kidding! I’m kidding! I’m not that cruel. Rest in peace, Mr. King. Haha), they immediately repented (asked Yah (God) to please forgive them of their sins and to help them to stop sinning), asked Yah (God) to help them to win their battles against opposing armies, and Yah (God) answered their prayers (Hallelujah! Yah (God) is so good!). As such, the Lord appointed a new judge to help them win their latest battle against King Jabin and the Canaanites-Deborah.

Deborah is one the most influential and powerful women in the Bible. Not only was Deborah one of only a few female prophetesses in the Bible (a teacher of Yah’s (God’s) Word, the Holy Bible), but she is also the only female judge in the Bible (female warrior, army leader, and rescuer of her people-the Israelites-from strong opposing armies). In Judges, Chapters 4 & 5 (in the Old Testament, or first part, of the Bible), we see that the Canaanites, under King Jabin and his army commander, Sisera (he’s a guy-don’t worry, the name initially threw me off as well. Haha), have conquered the Israelites, forced them into slavery, and are making their lives absolutely miserable. The Israelites had turned away from Yah (God), started worshipping false, fraudulent, phony, fruit loop “gods,” and this oppression (misery) was a part of their well-deserved punishment. Once the Israelites turned back to Yah (God), however, Yah (God) used Deborah, Barak (an Israelite army commander), and a foreign woman named Jael to defeat Canaan and free the Israelites from their oppression.

Once Deborah received the calling from Yah (God) to help lead the Israelites to victory against King Jabin and the Canaanites, she immediately ordered Barak, a commander of the Israelite army, to gather 10,000 male soldiers to fight the Canaanite army, Jabin’s Jokes, under Sisera, the commander of the Canaanite army. Deborah and Barak were fearless warriors for the Lord, they trusted the Lord and obeyed his commands, and they were ready to fight Sisera and those Canaanite cornballs (with their 900 iron chariots) at all costs (Bonnie and Clyde don’t have anything on Deborah and Barak!)! When Deborah, Barak, and the 10,000-strong Israelite army came to attack the Canaanites, wait for it…Sisera, this spineless snowflake and pitiful excuse for an army commander, ran away and left his army to fend for themselves! Wow! Way to go, Sisera! You’re an embarrassment to the male species! Revoke your man card NOW!

While the Israelites absolutely SLAUGHTERED the Canaanites (they flattened those fools like pancakes at IHOP!), Sisera thought that he had gotten away and decided to hide out in the tent of an “ally,” Heber, and his family. Little did Sisera know, however, that Yah (God) had already worked everything out, and he was going to die under the leadership of Deborah, Barak, and Jael, Heber’s wife. As Sisera hid out in Heber and Jael’s tent, Jael pulled the ultimate “okie doke” on Sisera. More specifically, Jael spoke to Sisera ever so sweetly, and prepared a warm, comfortable bed for him to sleep in. While Sisera was nice, warm and unconscious (he was sleeping), Jael suddenly took a hammer and drove a tent spike (a SHARP and THICK nail) through Sisera’s temple! Please allow me to word this differently; Jael SLAMMED a “big ol’ nail” through Sisera’s head, coming out the other side of his head, killing him instantly (OUCH!!!!!!!!!!). As Deborah, Barak and the Israelite army approached the tent, Kill Bill, I mean, Urma Thurman, I mean, Jael immediately told them where Sisera was, and led them to his bleeding, lifeless body. Canaan has been defeated! Canaan has been defeated! The Israelites have won! The Israelites are now free!

As we can all see, the Lord can use anyone to fulfill his purposes. Yah (God) used Deborah, Barak and Jael to defeat the Canaanite army in glorious fashion! Please note: Deborah, Barak and Jael were ready, willing, able, and enthusiastic vessels, excited to be used by the Lord to bring about his Will, plans and purposes for his people. When the Lord has work for us to do, let’s not be afraid, make excuses or try to run away from our calling. When the Lord calls us to do his work, let’s be excited and enthusiastic to be a part of his greater plan; the Lord will always prepare us to do what he wants us to do, and the results will be AMAZING!!!!

·   Believe that Yahushua Hamashiach (Jesus Christ) is Yah’s Son, that he died on the Cross/stake for our sins, that he rose from the dead (came back alive)-3 days later-with all power in his hands, that he ascended back into Heaven on a cloud, that he’s sitting at Yah’s right hand right now, and that he’s coming back one day to take his children (take all believers in him) home to Heaven and to judge/destroy this wicked world.

Once we’ve given our lives to Yahushua Hamashiach (Jesus Christ), we will live forever, y’all! When Yahushua Hamashiach comes back to Earth, he shall raise the dead back to life, and those of us who have given our lives to him (both dead and still living at the time of his return) will receive new bodies, we’ll receive new names, and we’ll live it up with him in Heaven forever (Aye! Turn up! Ain’t no party like a Holy Ghost party, ‘cuz a Holy Ghost party don’t (doesn’t) stop! Party over here! Ooh-ooh! Party over here! Ooh-ooh! SINLESS partying at its finest!)! I’m looking forward to it! Let’s get it!

Given the length of today’s article, I will not remake today’s Bible story. No worries, though (I’m still not THAT trifling!)! I have included a wonderful video from The Holy Tales: Bible, which explains the story of Deborah, Barak and Jael beautifully. With that in mind, I love you all, Yah (God) bless you all, and I’ll see you all on the next one! 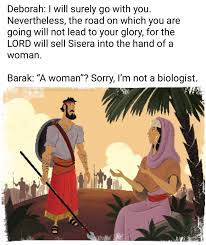 2 thoughts on “Deborah: The Simpleton Slayer!”