It’s that time of year again, y’all! We reflect on our Lord and Savior, Yahushua Hamashiach (Jesus Christ’s true name), dying on Calvary’s cross/stake, laying in Joseph’s tomb for three days (he was just taking a cat nap), and getting up on that third day, with all power in his hands (Superman and Black Lightning better BACK UP before they get SMACKED UP!).

Firstly, we shouldn’t limit our appreciation for Yahushua Hamashiach’s (Jesus Christ’s) resurrection to just Resurrection Sunday; Yahushua Hamashiach deserves adoration for his life, death and resurrection everyday…the man defeated Satan, Hell, death and the grave all in one fell swoop (like an A-1 BOSS!)! Yahushua Hamashiach didn’t need guns, drugs, liquor, sex, money, bling-bling (that hot garbage turns your neck green and these so-called “celebrities” have to return it after the video/photo shoot. Haha), curse words, or an entourage to prove to the world that HE was Yah (God’s true name; short for Yahuah), that Yah the Father (God Almighty) sent HIM to bring this sinful world back to him, that HE was the Lord and Savior that this lost world needed (we’re more Lost than Jack Shephard, Kate Austen, Nemo and Dory combined. Haha), and that HE is the way, the truth, and the life, and no one comes unto the Father, but by HIM (John 14:6 (KJV)).

Yah the Father (God Almighty) sent Yahushua Hamashiach (Jesus Christ), his beloved son, into the world to reconcile the world back to him…but that’s not where the story ends. Yahushua Hamashiach is coming back for his church (all believers in and followers of him; the most beautiful bride that will ever exist-no offense, ladies. Haha), he will destroy all of the evil in this world, and, as Yah the Father (God Almighty) makes clear to us in Philippians 2:10-11 (KJV), “That at the name of Jesus every knee should bow, of things in heaven, and things in earth, and things under the earth; And that every tongue should confess that Jesus Christ is Lord, to the glory of God the Father.”

I always like to explain how we all can become saved (give our lives to Yahushua Hamashiach (Jesus Christ)). Becoming saved is as simple as ABC:

·   Admit that we’re sinners, and ask Yah (God) to please forgive us of our sins (bad things that we say, do, don’t do, and/or think, that Yah (God) doesn’t like) and help us to stop sinning (Please clean me up, Lord! I’m hot garbage, dipped in excrement, sprinkled in chitling grease on the inside (just STANKY!)!).

·   Believe that Yahushua Hamashiach (Jesus Christ) is Yah’s (God’s) Son, that he died on the Cross/stake for our sins, that he rose from the dead (3 days later) with all power in his hands, that he’s back in Heaven, sitting at Yah’s (God’s) right hand right now, and that he’s coming back to get his children (take all believers home with him to Heaven) and to judge/destroy this wicked world.

·   Commit ourselves to following Yahushua Hamashiach (Jesus Christ)(listen to him and live for/like him forevermore).

I don’t know know about anyone else, but I’ve always been a very curious person (move around, Garfield! Curiosity won’t kill this cat!). I often wonder how we today would react to Yahushua Hamashiach’s resurrection, had it happened in modern times? Let’s find out! NOTE: I will be utilizing modern-day language, technology, and ways of living in this story, as we’re picturing this happening today.

Storytime: Jesus Did WHAT?!?!

Shelley (calling her best friend, Sandra, at 5:00 a.m.): Sandra?! Sandra?! Wake up! GIRRLLLL, you won’t believe what I just heard!

Sandra (wiping the crust out of her eyes and wondering why Shelley is calling her this early in the morning; she’s so trifling): Hey, girl. What’s up?

Shelley: Tamika just called me and told me that Yahushua Hamashiach (Jesus) isn’t in the tomb anymore! She was coming back from getting her hair done (Lord knows her head was looking like a war zone!), and she ran into Mary Magdalene, James’s mom, Mary, Joanna and Salome. They told her that they went to anoint Yahushua Hamashiach’s (Jesus’s) body, but when they got to the tomb, an earthquake came out of nowhere and–

Sandra: Hold up! There was an earthquake?! Did Tamika’s hair get messed up?! Watching her lose her mind over her bangs being blown to the back of her neck is the funniest thing ever! I’m sorry. I need to stop. Haha.

Shelley: You aren’t right for that! So wrong…just so wrong. Haha. Forreal, though, she told me that they told her that when they went to anoint Yahushua Hamashiach’s (Jesus’s) body, there was a huge earthquake, and an angel from Heaven, dressed in white, appeared. The angel rolled the stone away from in front of the tomb, told Mary and them that Yahushua Hamashiach’s (Jesus’s) body was gone, and said, and I quote:

“He is not here: for he is risen, as he said. Come, see the place where the Lord lay.”

Sandra: An angel appeared? Are you sure? You know that Joanna starts acting crazy when she hasn’t taken her medication. She tried to argue with me about talking to hey boyfriend in her dreams. Girl! I can’t help that I appeared in your dreams! I don’t want your boyfriend!

Shelley: I promise you that she was calm and in her right mind this time. They said that the angel appeared, rolled the stone away, told them that Yahushua Hamashiach (Jesus) was not in the tomb, and that they could check for themselves.

“Do not be afraid. Go tell my brothers to go to Galilee. There they will see me.”

Shelley: He said that if we’ve seen him, we’ve seen the Father-I believe that Yahushua Hamashiach (Jesus) is Yah (God) in bodily form. My guess is divine intervention. Anywho, Tamika told me that Mary Magdalene and them told her that they went and told the apostles what had happened, Peter and one other apostle went to the tomb and saw that Yahushua Hamashiach’s (Jesus’s) body was gone (only the linen cloths that his body had been wrapped in remained), the guards told the chief priests what had happened, and the priests tried to bribe them with money to say that the apostles stole Yahushua Hamashiach’s (Jesus’s) body during the night.

Sandra: I can’t stand those crooked-

Shelley: Errr! Back it up! Don’t do it! What would Yahushua Hamashiach (Jesus) do?

Sandra: Two words: MIND BLOWN. I don’t know what to say, girl. I’ll admit, all of this is a bit hard to believe, but you’ve always been my Day One, my ride or die, and have always kept it real with me. I’ll take your word for it.

Shelley: THANK YOU! I’m feeling good right now! How about we go to breakfast? I’ll call Tamika and invite her as well.

Sandra: Sounds good to me, girl! I’ll call you when I’m dressed.

Shelley: Perfect! I’ll see you in a few!

Sandra: See you in a few, Love! Deuces! 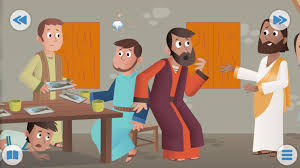 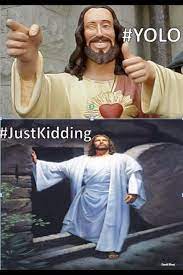