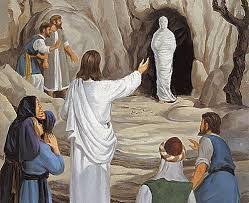 No one likes to be sick (unless you’re trying to get out of running that mile in gym class again, you haven’t studied for that big history test, or you want to avoid that petty coworker that makes you want to lay hands on him/her in a less than holy way). When we’re sick, we often wrap ourselves in 12 blankets (looking like a demented Q-tip or a bloated snow cone), eat a lot of hot soup, rub Vick’s all over our bodies (teehee, I smell like lavender), and binge-watch whatever happens to be on TV that day (my goodness, some of these shows are TRASH!). When we’re sick, our families, friends, and loved ones are deeply concerned for us and want us to feel better; they’ll feed us, talk to us, sing to us (if Uncle Spud sings “Living La Vida Loca” one more time), change the channel for us, and pray for us (the latter is the most important). I’m the type of person who wants to see my loved ones make a full and speedy recovery from whatever they’re dealing with as soon as possible. I will call the doctor, take my loved one to the doctor, and make sure I’m doing everything in my power to help my loved one to get well (I’ll be that pesky gnat that the doctors will NEVER be able to get rid of…and I love it. Haha). What happens when your dear brother is sick, on the brink of death, and you’re seeking immediate medical attention? This brings us to the story of Jesus raising Lazarus from the dead.

In the 11th Chapter of John, Jesus finds out that his dear friend, Lazarus (one of Jesus’s followers), is very sick, and his two sisters, Mary and Martha, want Jesus to heal him. Jesus tells his disciples that Lazarus had been very sick and has died, but that he (Jesus) will raise Lazarus from the dead, so that they may know that he (Jesus) is God. Jesus and his disciples travel to Bethany (in Judea, which was enemy territory for Jesus; those clowns wanted to kill him) to see Lazarus (road trip! I call shotgun!), and Lazarus’s two sisters, Mary and Martha, tell Jesus that their brother has died and has been buried for 4 days; they tell Jesus that Lazarus would have lived had Jesus come sooner (slow your rolls, Laverne and Shirley! You don’t rush God; he knows what he’s doing). Jesus didn’t get angry, however, but said the following to Martha:

Martha assumed that this meant Lazarus would rise again when Jesus came back for his children on the last day of the world, but Jesus had other plans. Jesus was getting ready to raise Lazarus from the dead today, now, in front of their eyes, no questions asked. You would have thought that Martha had Charlie Brown’s teacher in grade school-Lord knows we couldn’t understand a LICK of what she was saying. Haha Jesus asked Martha if she believed in him, and Martha said that she believed he was the Christ and the Son of God, who came to die for and save the world (paraphrasing John 11:27 (KJV)). Jesus then asked Martha to get her sister, Mary (oh, Mary! Your Lord and Savior would like a word with you!), which Martha did (none of that sassiness out of you, Martha!). Martha explained to Jesus (like Jesus didn’t already know) that Mary was weeping at Lazarus’s grave site, and when Mary saw Jesus, she fell to his feet and told him if he had been there sooner, Lazarus would not have died (would Wilma and Betty stop doubting God’s power for ONE MINUTE, PLEASE?!). Mary cried (these were real tears, folks; not those fake tears you cry when you want that extra scoop of ice cream), and Jesus was deeply hurt by this (Jesus actually cried) and asked Mary where Lazarus had been laid. Mary and Martha took Jesus to Lazarus’s grave-a cave with a stone in front of it-, and Jesus told Martha to roll the stone away. Do you think Martha, being the outspoken ostrich that she is, simply listened to Jesus and rolled the stone away? Of course not! She complained to Jesus that Lazarus had been dead for 4 days and was STANKING! Martha, stop acting like Boo-Boo the Fool and just do what Jesus asked you to do, K? Jesus asked Martha once again if she believed in his power, she said yes, she rolled the stone away, Jesus thanked God the Father for hearing his prayer, and in a loud and clear voice, Jesus said, “Lazarus, come forth!” Boyyyy, it’s about to go down! All of a sudden, Lazarus walked out of the grave-alive, covered in grave clothes, with a napkin rolled around his face-there’s no way that tastes good. Jesus commanded that Lazarus be freed, and he was so. The Jews had just witnessed a miracle (Miracle Whip better sit down; posers)! Word got back to the Pharisees (these salty seaweeds, again) that Jesus had raised Lazarus from the dead, and the Pharisees, being the angry grinches that stole Christmas, made a plan to kill Jesus. The Pharisees looked high and low for Jesus (someone should have thrown sand into their eyes; in the words of Steve Urkel, “Did I do that?”), but he was not yet to be found. What a friend we have in Jesus! I wonder how people would have reacted to Jesus performing such a miracle today? Let’s put our thinking caps on! NOTE: I’ll be utilizing modern day language, technology, and ways of living in the story, as we’re picturing this happening today.

Messenger: Jesus?! Jesus?! Ronnie’s aunt’s cousin’s sister’s mother’s friend told me that your pal, Lazarus, is really sick and needs a miracle. His sisters, Mary and Martha, are anxiously awaiting your arrival.

JESUS CHRIST (to his disciples): Let us go into Judaea again.

The Twelve Disciples: Um, Jesus, we know that you’re the man and all, but we don’t think it’s a good idea to go back to Judaea. The Jews want to kill you in cold blood. Do you really want to jump back into the lion’s den, so to speak (we see you, Hebrew boys!)? We’re not trying to doubt you or anything, but they treat you like public enemy number one over there. We don’t have our conceal and carry licenses yet. Are you sure you want to go back there?

JESUS CHRIST: Are there not twelve hours in the day? If any man walk in the day, he stumbleth not, because he seeth the light of this world. But if a man walk in the night, he stumbleth, because there is no light in him. These things said he: and after that he saith unto them, Our friend Lazarus sleepeth; but I go, that I may awake him out of sleep.

The Twelve Disciples: Are you sure that you want to wake Lazarus up, Lord? It sounds like he’s having some GOOD dreams right now. He’s probably snoring, drool coming down the side of his mouth, a fly attacking his sandwich, his nephew drinking his RC, all of that. Haha

JESUS CHRIST: Lazarus is dead. And I am glad for your sakes that I was not there, to the intent ye may believe; nevertheless let us go unto him.

JESUS CHRIST: I am the resurrection, and the life: he that believeth in me, though he were dead, yet shall he live: And whosoever liveth and believeth in me shall never die. Believest thou this?

Martha: Yes, Jesus. You are the Christ, you’re God’s son, God in the flesh, the Savior of the world, and all that jazz. You have all power in your hands, and Batman, Superman, and Spiderman have nothing on you. I know, Jesus, I know.

*Jesus sent for Mary, and Martha went to tell Mary about Jesus*

*Mary and the Jews wept, and Jesus began to cry as well. He asks Mary where her brother is buried, and she and the others take him to Lazarus’s grave site*

Martha: Jesus, I don’t think that’s a good idea. Lazarus has been buried for four days, and he smells worse than a skunk dipped in excrement, smothered in chitling grease, and sprinkled with Grandpa’s armpit hair. That boy STANKS!

JESUS CHRIST: Said I not unto thee, that, if thou wouldest believe, thou shouldest see the glory of God?

Martha: Yes, Lord. *Martha rolls away the stone that had been placed in front of Lazarus’s grave*

JESUS CHRIST: Father, I thank thee that thou hast heard me. And I knew that thou hearest me always: but because of the people which stand by I said it, that they may believe that thou hast sent me. Lazarus, come forth!

*Lazarus walks out of the cave, completely covered in grave clothes, and with napkins wrapped around his face. We see where the “Mummy” movie came from*

JESUS CHRIST: Loose him, and let him go. *All of the grave clothes and napkins fall off of Lazarus. He’s alive and free! Ooh, la-la!*

*Those bougie busters, the Pharisees, find out about Jesus’s grand miracle, and begin their evil plot to kill Jesus. No worries, though. Jesus wins in the end* 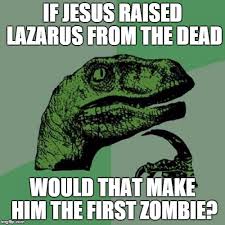 14 thoughts on “All Rise! That Means You, Lazarus.”