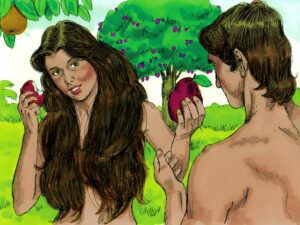 I’m sure that most of us are familiar with the phrase “an apple a day keeps the doctor away.” As kids, we’re always taught that if we eat our fruits and vegetables (and not overdo it on the candy and chips), we’re less likely to get sick, and less likely to have to go the doctor (I tried to run down the street whenever I had a doctor’s appointment; my grandfather might have been 60 at the time, but that man was FAST!). Seeing as how I hated going to the doctor as a kid, I started eating an apple a day right after that appointment (which was only a minor checkup), and I must admit, I felt A LOT better! Parents tell you the truth once in a while (just kidding, maybe 65% of the time). This entire situation was flipped at the beginning of time, however, as God told Adam and Eve NOT to eat apples from a particular tree-they would get sick and die if they did. Let’s explore this story a little more.

The Bible begins in the Book of Genesis, with God creating the entire world. It took God six days to make the entire world (it takes me two weeks to make a decent, non-burnt pancake), and on the sixth day, he created the first humans, Adam and Eve. God gave Adam and Eve a beautiful garden, called the Garden of Eden, to live in. God gave them everything that they needed-fruits, vegetables, plants, trees, fresh air, they were in control of all of the animals and could tell them what to do (down, Sparky!), and they would work in the Garden to keep it beautiful. God, being the wonderful creator and provider that he is, only asked one thing of Adam and Eve; God told Adam and Eve not to eat from the Tree of Knowledge of Good and Evil. According to Genesis 2:17 (KJV), God told them, “But of the tree of the knowledge of good and evil, thou shalt not eat of it: for in the day that thou eatest thereof thou shalt surely die.” That’s short, sweet, and to the point. God told Adam and Eve that if they ate any fruit from the Tree of Knowledge of Good and Evil, they would die (if my life depends on not eating an apple, I’ll gladly grab a bag of grapes and keep walking). However, like many of us have done (and still do), Adam and Eve wanted to be hardheaded and not listen-they thought that they were so smart and knew more than God knew-and it backfired on them. The Devil, in the form of a serpent, convinced Eve that she wouldn’t die if she ate an apple from the Tree of Knowledge of Good and Evil. Welp, like Boo-Boo, the Fool, Eve fell for it. Adam and Eve ate of the apple, they tried to run away from God (good luck with that), God caught them, and God punished them, which included being kicked out of the Garden of Eden and dying (more on their deaths in the author’s note at the bottom of the page). Let’s imagine how this story would have played out today (please note that I’m incorporating modern ways of living and lingo into the story, as we’re picturing this exact scenario today):

Trenton: Look at this garden, Tiffany! We’ve hit the jackpot! Look at all of these plants, trees, fruits, vegetables, and animals! I want that bluebird to say my name. *Talking to the bird, as if it were actually going to talk back to him*. Can you say, “Prince Trenton, The Great?” Say it with me, bird! Princeeee…Treeennntonn…Theeeee…Greeeeeattttt!

Tiffany: Haha! You’re a mess, Trenton. I can’t believe that we have the entire Garden of Eden to ourselves! God hooked us up! This is a huge upgrade from that roach-infested studio apartment we were living in; we’ve leveled up BIG TIME! I’m about to post a picture to Snapchat, hashtag BOSSES (#BOSSES)!

Trickster Trey (a serpent): Psssst! Psssst! Tiffany?!! Come over here for a second.

Tiffany: Excuse me? Who are you? I don’t take orders from strangers. What do you think this is?

Trickster Trey: Calm down, Cleopatra. I saw you walking near the trees, and I thought that you might be a little bit hungry. How would you like to taste the most delicious apple that has ever been grown?

Tiffany: Wait a minute. God told us not to eat from the Tree of Knowledge of Good and Evil. He said that if we eat from this tree, we’ll die. Trenton and I just made it out of the hood. We want to live long enough to enjoy it.

Trickster Trey: Look at how beautiful this apple looks. It’s so big, and red, and juicy, and flavorful. I know how much you love apples and your grandma’s famous apple pie. Just think about how much apple pie you could eat if you added these apples to your batch? We’re talking Krispy Kreme levels of goodness, except with apples!

Tiffany: It does look good.

Trickster Trey: Try it. You won’t regret it.

Tiffany: Ok. You got me. I’ll eat it.*She eats the apple*. Boy, this apple is the bomb.com! YESSSSSS!!! Trenton?!! Trenton?!! Come eat some of this apple! It’s SOOOOO good!

Trenton: Whatever you say, my love. *He eats from the apple as well*. Wow! That’s the first time I’ve eaten an apple and actually enjoyed it. Where have you been all of my life?! I…oh no. Oh no. We’re in trouble. God told us not to eat any apples from the Tree of Knowledge of Good and Evil. You know that he knows everything! He’s on his way back! He’s on his way back! Quick! Let’s hide!

Tiffany: Shoot! You’re right! We’ve messed up. Let’s hide! Can we put something on? I’m feeling a draft, and I don’t need my parts just out in the open like this.

Trenton: Good point. Let’s cover ourselves with these fig leaves.

GOD: Trenton, where are you?

Trenton (in a nervous sweat and stuttering): Um…um…I’m here, God. Tiffany and I were trying to put some clothes on, being naked and all.

GOD: Who told you that you were naked? Trenton, did you just eat from the Tree of Knowledge of Good and Evil, after I specifically told you not to?

Trenton: It’s not my fault, God! Tiffany made me eat it! That woman that you gave me? She bamboozled me! She gave me the apple and told me that it “tasted so good” and that we could use it to make apple pie, and all of this stuff (wow, Trenton, way to man up and put your woman on blast like that)!

Tiffany: Oh no you didn’t!

GOD: Tiffany, is it true that you ate an apple from the Tree of Knowledge of Good and Evil?

Tiffany (in a nervous sweat and stuttering): Um…um…yes, God. I’m sorry. That little weasel, Trey, tricked me into eating the apple, and, I admit, I ate it.

GOD: Since you all couldn’t follow basic instructions, here’s what you’ve all won: all three of you are cursed. Trey, you get to crawl on your belly and eat dust for the rest of your life-NO MORE WALKING FOR YOU! Tiffany, you will feel A LOT of pain during childbirth, and you must listen to Trenton, even though he’s not the brightest bulb in the chandelier. Trenton, you’ll be doing hard labor to eat the rest of your life-you better get used to coming home sore, with blisters all over your body, and a headache the size of New York City! All of you need to get out of my garden. Don’t let the door hit you where I, God Almighty, split you!

AUTHOR’S NOTE: In the next story, we’ll take a look at how Trenton (Adam) and Tiffany’s (Eve’s) kids acted like they didn’t have any home training, and how they all surely died (physical death). One thing that I want to point out is that Adam and Eve’s first death was a spiritual death-when Adam and Eve disobeyed God and ate from the Tree of Knowledge of Good and Evil, they brought sin into the world and became separated from God (God kicked them out of the Garden of Eden). When we sin against God, we are separated from him, but if we sincerely ask God to forgive us of our sins, we turn away from those sins (don’t do those bad things anymore), believe that Jesus Christ died for our sins and rose from the dead, three days later, with all power in his hands, and make a decision to follow Jesus Christ the rest of our lives, God will forgive us of our sins, we will be back in his good graces, and we will see Heaven when we die. Too bad Adam and Eve didn’t get the memo. We’ll see how that played out. Haha. God bless you all!