Don’t Worry, Jehoshaphat! Yah’s Got That!

Don’t Worry, Jehoshaphat! Yah’s Got That!

“I don’t know what they want from me; it’s like the more WARS that we come upon, the more problems we see!” For those of you wondering, yes, I did just partially quote Biggie’s “More Money, More Problems” chorus. Before anyone starts, I don’t listen to Biggie anymore (I’ve fully given my life to my Lord and Savior, Yahushua Hamashiach (Jesus Christ’s true Hebrew Israelite name)! Hallelujah! Haha), I’ve turned over a new leaf, and I’m simply using the chorus to prove a point! Now that that’s out of the way, let’s continue. Haha.

When we look at the Word of Yah (God) (the Holy Bible), we see constant (and the Tray means CONSTANT) war-people love to act like they don’t have any home training for a piece of land that they don’t own (this is Yah’s world, not ours! Try again, Junior!), or for a piece of fool’s gold (that hot garbage will turn your neck green like the Incredible Hulk, and your breath green like Tajiri (wrestling reference-My eyes! My eyes! I can’t see! I can’t see! Haha)).

While many wars are fought for ridiculously selfish and pointless reasons (why are we even considering a war on glazed vs unglazed Krispy Kreme donuts?! If the donut isn’t glazed and it’s drier than Phoenix, AZ, on a good day, it’s not a donut! It’s a BAGEL! END OF DISCUSSION!!! Haha), other wars are fought for the greater good of society-it’s in accordance with Yah’s will and plans for his people (Yah’s people will kick butt, chew bubblegum, and ask questions later. Haha. Say “no” to violence, kids! Yahushua Hamashiach (Jesus Christ) and I love you!). This brings us to today’s Bible story: King Jehoshaphat of Judah destroys the Moabites and Ammonites…without even touching them!

In the 20th Chapter of 2 Chronicles (Old Testament), here’s the skinny (that’s slang for “here’s what’s going on at the moment.” Haha): the Ammonites and Moabites have joined forces and want to take King Jehoshaphat (Jehoshaphat was 35 years old when he became King of Judah) and Judah out (the Ammonites and Moabites supported that lava-loving loser, Satan, and his delusional dipstick of a sidekick, Baalam (often just referred to as Baal); King Jehoshaphat, though not perfect (none of us are; the only perfect person to ever walk the face of the earth was our Lord and Savior, Yahushua Hamashiach (Jesus Christ) himself), worshipped the ONE and ONLY true Yah (remember, everyone, Yah is the ONE and ONLY true God in three different forms-the Holy Trinity-Yahuah (God the Father/God Almighty), Yahushua Hamashiach (God the Son/Jesus Christ), and the Ruach (God the Holy Spirit/Holy Spirit). King Jehoshaphat truly loved and followed Yah, and Yah considered Jehoshaphat to be his loving and loyal servant. 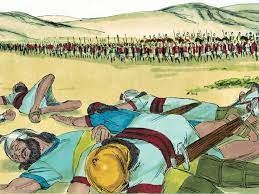 When Jehoshaphat found out that the Scum of the Earth Society…erm, I mean, the Butthead Brigade…erm, I mean, the Ammonites and Moabites were coming after him, he became afraid. Unlike his buddy, King Ahab (we remember King Ahab of Israel! That braindead doofus disrespected Yah, Yah told Ahab that he would die in battle, Ahab didn’t believe Yah, and SURPRISE! Ahab was killed in battle (Ding-dong! The dipstick is dead!). Haha. I fully describe Ahab’s demise in my article, “I Don’t Follow Y’all’s Way, I Follow Yahuah!“), Jehoshaphat immediately prayed to Yah (God) about the situation (good man! good man! Ladies and gentlemen, Jehoshaphat is smarter than the average bear and a 5th grader! YEESSSSSS!!!!!! Winner!!!). Jehoshaphat humbled himself before the Lord, he asked Yah for help against the Moabites and Ammonites, and he recognized that he and the people of Judah were NOTHING without Yah (we’re not anything without you, Lord!):

2 Chronicles 20: 10-12 (KJV)–And now, behold, the children of Ammon and Moab and mount Seir, whom thou wouldest not let Israel invade, when they came out of the land of Egypt, but they turned from them, and destroyed them not; Behold, I say, how they reward us, to come to cast us out of thy possession, which thou hast given us to inherit. O our God, wilt thou not judge them? for we have no might against this great company that cometh against us; neither know we what to do: but our eyes are upon thee.

Let’s take a brief pause here. When King Jehoshaphat ran into trouble, he didn’t initially call on his friends (what’s up, dawg?! What it do, homie?! What’s good, my home skillet biscuit with butter and jelly on top?! Can you help a brother out?!), his family (Mommy!!!!!), or even the people of Judah-he called on the only person who could truly help him and deliver him from his predicament-Yah himself (he created this entire world-including you and I-in 6 days! Nothing is impossible for Yah to do!). When we find ourselves in difficult situations, the first person that we should ALWAYS call on is our Lord and Savior, Yahushua Hamashiach. He loves us, he cares about us, he hears us, and he’ll help us. We should certainly call on our friends and family as well, but let’s make sure that we’re recognizing that Yah is in control.

2 Chronicles 20:15-17 (KJV)–And he said, Hearken ye, all Judah, and ye inhabitants of Jerusalem, and thou king Jehoshaphat, Thus saith the Lord unto you, Be not afraid nor dismayed by reason of this great multitude; for the battle is not yours, but God’s. To morrow go ye down against them: behold, they come up by the cliff of Ziz; and ye shall find them at the end of the brook, before the wilderness of Jeruel. Ye shall not need to fight in this battle: set yourselves, stand ye still, and see the salvation of the Lord with you, O Judah and Jerusalem: fear not, nor be dismayed; to morrow go out against them: for the Lord will be with you. 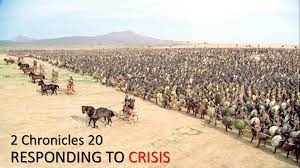 YASSSSSSSS!!!! Yah just told King Jehoshaphat that they don’t have anything to worry about-Yah is going to fight and win the battle for them (I can just imagine Yah saying, “I’ve got this!” Now we know where George Lopez got the phrase from. Haha)! Yah is a G…OD! The MAN! The A-1 BOSS! The divine DON! The BOMB.com!!!!! Yah can just look at those imbeciles and make them disappear (it’s a bird! It’s a plane! It’s those flaming morons flying head first into a tree! WHAM! BAM! KAPOW!). Yes, Lord! Please forgive me, Lord. Y’all know that I need help. Haha.

Upon hearing this wonderful news, King Jehoshaphat told the people to keep the faith and praise Yah! Jehoshaphat and the people of Judah fell to their knees, bowed their heads, thanked the Lord for his goodness, worshipped his holy name, blessed his holy name, and sang praises to the Most High Yah (Aye! Turn up! Ain’t no party like a Holy Ghost party, ’cause a Holy Ghost party don’t stop! Party over here! Ooh-ooh! Party over here! Ooh-ooh! Haha)!

2 Chronicles 20: 23-24 (KJV)–For the children of Ammon and Moab stood up against the inhabitants of mount Seir, utterly to slay and destroy them: and when they had made an end of the inhabitants of Seir, every one helped to destroy another. And when Judah came toward the watch tower in the wilderness, they looked unto the multitude, and, behold, they were dead bodies fallen to the earth, and none escaped.

HAHAHAHAHAHAHAHA! Won’t Yah do it?!?!?!?! Yah caused the Ammonites and Moabites to fight EACH OTHER, and they ended up killing EACH OTHER…every single one of those jamokes were killed in the ambush…not one of them survived (EVERYONE died!). So much for attacking Judah (Yah has a wonderful sense of humor, y’all. Haha). 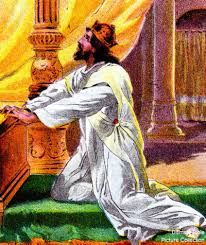 Once King Jehoshaphat and the people of Judah took everything of value (everything that they wanted. Haha), they returned to Jerusalem, they celebrated the Lord (they had everything! Singing (holy karaoke!), dancing, instruments (psalteries, trumpets, harps), the works!), and since the surrounding countries had heard about what Yah had done for Jehoshaphat and Judah and to the Ammonites/Moabites (Yah had flattened those fools like pancakes at IHOP, y’all! Pass the butter and maple syrup. Haha. jkjkjkjk….sort of. Haha), no country dared to attack Judah for quite some time (Judah experienced peace and quiet for a while. FINALLY! Haha).

Jehoshaphat reigned as the King of Judah for 25 years, and although he mostly continued to follow the Lord and do his will (just as his father, Asa, had also reigned as King of Judah and worshipped the one and only Most High Yah-he led the people of Judah to do the same), Jehoshaphat did have a lapse of judgment (in other words, he had a moment of drinking the moron’s milk and taking a sip from the Slurpee of stupid with his Frosted Flakes): he joined himself with the wicked and evil Ahaziah (the son of King Ahab and Queen Jezebel; please revisit my “I Don’t Follow Y’all’s Way, I Follow Yahuah!” and “Witches Get Stitches!” articles to see what happened to and what I think about them. Haha) to build ships to go to Tarshish. Yah wasn’t having any of that, and he proceeded to DESTROY (Yah completely WRECKED) the ships-they didn’t go anywhere. Haha.

All in all, King Jehoshaphat was a good and loyal king of Judah: he loved Yah, he led the people in their love and worship of Yah, and they were rewarded for their faith in and loyalty to him (it’s not just a feel good story, but the truth; all of this actually happened). Yah for the win again (Yah can’t lose, boy! I love it. Haha)!

·   Admit that we’re sinners, and ask Yah (God) to please forgive us of our sins (bad things that we say, do, don’t do, and/or think, that Yah (God) doesn’t like) and help us to stop sinning (Please clean me up, Lord! I’m hot garbage, dipped in excrement, sprinkled in chitling grease on the inside (just STANKY!)!).

·   Believe that Yahushua Hamashiach (Jesus Christ) is Yah’s (God’s) Son, that he died on the Cross/stake for our sins, that he rose from the dead (3 days later) with all power in his hands, that he ascended back into Heaven, that he’s sitting at Yah’s (God’s) right hand, and that he’s coming back to get his children (take all believers home with him to Heaven) and to judge/destroy this wicked world.

·   Commit ourselves to following Yahushua Hamashiach (Jesus Christ)(listen to him and live for/like him forevermore).

Once we’ve given our lives to Yahushua Hamashiach (Jesus Christ), we will live forever, y’all! When Yahushua Hamashiach (Jesus Christ) comes back to Earth, he shall raise the dead back to life, and those of us who have given our lives to him (both dead and still living at the time of his return) will receive new bodies, we’ll receive new names, and we’ll live with him in Heaven forever (cue the Dexter laugh!)! I’m looking forward to it! Let’s get it!

Given the length of today’s story, I will not do a modern-day remix of it. No worries, though (I’m still not THAT trifling, y’all!)! I have included a wonderful video from Sharefaith Kids, which explains the story of Judah vs the Ammonites/Moabites beautifully. I hope that you all enjoy!

With that being said, I love you all, Yah (God) bless you all, and I’ll see you all on the next one! 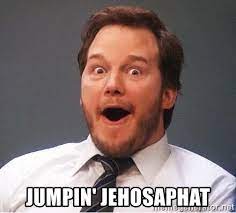 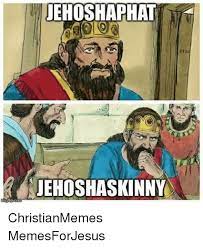 12 thoughts on “Don’t Worry, Jehoshaphat! Yah’s Got That!”