Don’t you just love it when people run their mouths about how tough they are, only to find out that they’re softer than marshmallows and Cool Whip when it’s time to prove it (snowflake! Haha)? These are the clowns who threaten to “meet you in the parking lot” for staring at their girlfriends, only to prepare a picnic and serenade you with Barry Manilow’s greatest hits once you arrive (what’s good, Carlton?! I loved watching that dude. Haha).

These are the fake friends (those delusional dipsticks! Please forgive me, Lord. Haha) who claim that they’ll always love you, will always be there for you, and will never leave your side, regardless of the situation (they claim that they’ll be there through the good, the bad, and the UGLY!). As history has shown (and will continue to show) us, this class of people is full of more hot air than Fat Albert after breakfast (will someone PLEASE crack a window?!?! I’m dying in here!), and when the “going gets tough,” these jamokes will scatter quicker than leaves in the autumn breeze (they’re blowing away from their own bull-SHUT YOUR MOUTH! Haha).

The story doesn’t necessarily end here, however. Depending on the kind of person that you’re dealing with (a Level 1 Imbecile, a Level 2 Doofus, or a Level 3 Ignoramus), that person may or may not see the error of his or her ways. God can change anyone (he changed me from an unsaved smart aleck to a SAVED smart aleck. Haha), and once he does, we’ll see those same people make lifestyle changes (BUMP those ridiculously tight leather pants (how do you even walk or “breathe” in those?! Haha); we’re rocking sweatpants now! Haha), try to right their wrongs, and try to be halfway decent human beings. With this in mind, let’s visit the story of Simon Peter denying Jesus 3 times, shall we? 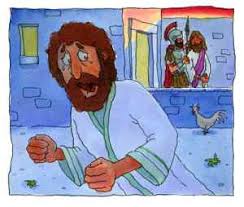 In the 26th Chapter of Matthew, Jesus and his disciples are at the Last Supper. This particular meal is called the Last Supper because Jesus knew that immediately following the meal, one of his disciples, Judas Iscariot (that LOSER!!!!), would betray him for 30 pieces of silver (roughly $200-he’s an IDIOT!!!!!), tell the Pharisees (a religious group of people who hated Jesus’s teachings about the Kingdom of God and the Law, and wanted to kill him) where he was, and Jesus would be arrested, beaten within an inch of his life, and crucified on the Cross (a brutal and barbaric way to die).

Just to be clear, Jesus Christ is God in the flesh, the 2nd person of the Holy Trinity: God the Father (God Almighty), God the Son (Jesus Christ), and God the Holy Spirit (the Holy Spirit, which dwells within us once we’ve repented of our sins (asked God to forgive us of our sins (bad things that we say, do, don’t do, and/or think, that God doesn’t like)) and asked Jesus into our lives as our Lord and Savior).

Jesus came into the world to die-he has always existed (before the beginning of time), and he knew that God the Father had sent him into the world to die on the Cross for our sins-we were (and still are) a sin-sick world, we needed immediate healing, and Jesus was the only person who could heal us and reconcile us back to the Father (God Almighty). In other words, as John 3:16 (KJV) tells us:

John 3:16 (KJV)–For God (God the Father) so loved the world that he gave his only begotten Son (Jesus Christ), that whosoever believeth in him (Jesus Christ) should not perish (die in our sins and suffer eternal torment in Hell), but have everlasting life (we’ll party with Jesus in Heaven forever, y’all! Aye! Ain’t no party like a Holy Ghost party, ‘cause a Holy Ghost party don’t stop! Party over here! Ooh-ooh! Party over here! Ooh-ooh! Haha).

Jesus knew that this would be the last meal that he’d ever have with his disciples, and just as Judas was going to betray him later that night, he also told another of his disciples, Simon Peter, that he would deny Jesus three times before the cock crowed (Peter, NOOOOOOOOO!!!!!!). Peter loved Jesus (he was a rough rider! A ride or die disciple! An outspoken renegade for the Lord! He was a holy thug! GANGSTA! Haha), and he couldn’t believe that Jesus would say such a thing (I love you, Jesus! I’d die for you! I’ll never deny you…or so he thought). Jesus knew better, however, and shortly after Jesus was arrested, Peter showed his behind.

In John 18, as Jesus was arrested by the Pharisees and carried into the palace of the high priest, Peter (along with the other disciples) followed behind Jesus and stood outside the door of the palace. Suddenly, a woman saw Peter and recognized him-he was one of Jesus’s 12 disciples! When the woman asked Peter if he knew Jesus, here was Petey’s response:

John 18:17 (KJV)- Then saith the damsel that kept the door unto Peter, Art not thou also one of this man’s disciples? He saith, I am not. 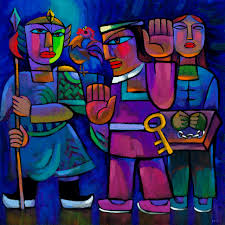 Several servants and officers were also standing outside of the palace (it was cold, y’all! We would have been frozen ice cream bars on the ground (for real!)! It was so windy, the wind was giving their THOUGHTS whiplash. Haha), and they had formed a fire (using coals) to stay warm; Peter decided to join them and warm himself up.

While Peter was dreaming of being on a warm beach in Cancun (hey, it could happen. Haha), the high priests were interrogating Jesus, asking him about his disciples and his teachings. When Jesus correctly (and respectfully) told them that they could ask his followers what he taught them-they’d surely remember his words-one of the officers (that flaming scumbag) slapped Jesus with the palm of his hand (oh no he didn’t! Where are my keys?! That flaming moron is asking to be run over with my car!!!! You don’t slap Jesus Christ! He’s your Messiah! Your Lord and Savior! He’s God in the flesh! AHHHHHHHHHH!!!!!).

Jesus asked what evil he had done to warrant the slap (he hadn’t done anything wrong! Jesus was perfect and never committed sin! He didn’t deserve that slap! I’d like to slap that officer, though! I’ll knock him three ways into next week! Please forgive me, Lord. Please help me, Jesus! I know I need help. Haha), and he was brought before Caiaphas, the high priest. While Peter was still warming his hands by the fire, the servants and officers asked him if he knew Jesus, to which he replied in kind:

John 18:25 (KJV)– And Simon Peter stood and warmed himself. They said therefore unto him, Art not thou also one of his disciples? He denied it, and said, I am not.

One of the servants of the high priest chimed in (he had to give his two cents, y’all! Haha), recognizing Peter as the man who had chopped off his homie’s ear (Peter had chopped off his boy’s ear while the Pharisees were coming to arrest Jesus in the Garden of Gethsemane. *No one touches my Jesus! Hiyah! Who wants chop suey?! I like to play with sharp objects! Try me if you want to!!! Jesus told Peter that “that was enough,” that wasn’t the Godly thing to do, and Jesus immediately healed the man’s ear*). When he asked Peter if he (Peter) was the man that he (the servant) had seen in the Garden of Gethsemane with Jesus, Peter responded as follows:

John 18: 26-27 (KJV)–One of the servants of the high priest, being his kinsman whose ear Peter cut off, saith, Did not I see thee in the garden with him? Peter then denied again: and immediately the cock crew.

Peter had just denied Jesus a third time (and had forgotten his Sunday School language after this third denial. That man could swear like a sailor…bad Peter! Hahahahaha), and as Jesus predicted, Peter denied him thrice (which means three times) before the cock crowed. Peter immediately remembered what Jesus had told him during the Last Supper, and as such, Peter began to weep bitterly (he cried uncontrollably, as he couldn’t believe that he had just denied his precious Lord and Savior, Jesus Christ, three times). 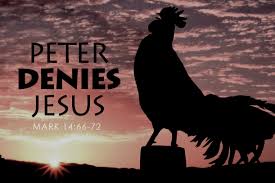 Peter repented of his sin (he asked God to please forgive him for betraying Jesus-please forgive me, Lord! I can’t believe that I denied you! Please forgive me of my foolishness! Please cleanse me and make me whole! Please make me more like you! I’ll never deny you again, Lord! I put my life on that!), and God immediately forgave him. From that point on, Simon Peter was ON FIRE for Jesus! He preached the Gospel of Jesus Christ throughout the land, he was unashamed to proclaim his belief in Jesus, and even in death (he was killed for spreading the Gospel of Jesus Christ, years later), he would not deny Jesus.

Interestingly enough, Peter died the same way that Jesus had died-crucifixion on the Cross. However, Peter didn’t feel worthy enough to die as Jesus had died-right side up on the Cross. As such, Peter wanted to die upside down on the Cross, and the ruthless Roman authorities honored his request (oh, you worthless pieces of monkey trash are so kind!). Peter would take his last breath upside down on a wooden cross, but he will forever be known as one of Jesus’s most outspoken, and most loyal, followers.

WOW! This story gave me chills! When you’ve been changed by the blood of Jesus Christ, you’ll stop at NOTHING to tell the world about it (Hallelujah! Praise the Lord! Thank you, Jesus! God is good!).

Although I will not do a modern-day remix to this story (don’t worry! I still have something for you all! I’m not THAT trifling! Haha), I have included a great video from Crossroads Kids’ Club that summarizes the story of Peter’s denial of Jesus and his repentance beautifully.

I hope that you all enjoyed today’s post! In my next post, we’ll explore the story of the backstabbing butt wipe himself, Judas Iscariot (get your rifles ready! I’m kidding! Put the shotgun down, Uncle Stuart! Haha). Until then, I love you all, God bless you all, and I’ll see you all on the next one! 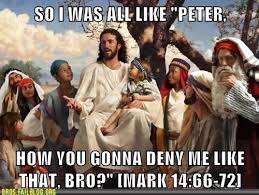