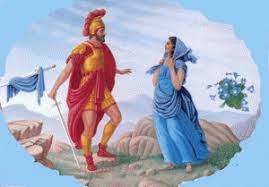 All of my fathers in the house, stand up! Despite what the media tries to tell us (those warped losers. Haha), fathers are extremely important to the family unit. When God created the family unit, he meant for husbands/fathers to be the heads of the household (don’t have a conniption, ladies! I’m just telling y’all what God has told all of us! If that rubs any of you the wrong way, take it up with God! I’m just the messenger. Haha). When a father is worth a $2.00 steak and the $0.99 Styrofoam plate that it’s sitting on, he deserves love and respect. 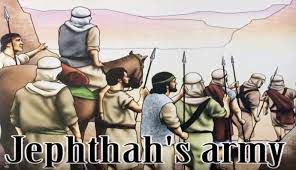 If a father is a fool and a half (he makes Conor McGregor look like a dignified diplomat-OH, THE HORROR! Haha), and wants to lead his family off of the proverbial cliff, God does not expect us women and children to follow that delusional dipstick (y’all know that I’m outspoken and will tell you EXACTLY what I think. Haha). When a father allows himself to be led by God, he will naturally make the best decisions for his family. Though none of us are perfect (we’re all a bunch of sinful tapeworms-we DISGUST me! Haha), a God-led father’s decisions will reflect his love for God and his family-no bearded backhanding required (say no to violence, everyone! Jesus preaches peace in the streets! Haha). Given that today is Day#5 of my “Are These Dudes Nuts?!” series, we’re going to take a look at a flaming piece of trash posing as a father, the Incompetent Impostor himself, Jephthah (who the flip is that?! Haha).

In the 11th and 12th Chapters of Judges, we’re introduced to Jephthah-his father is Gilead (and the city that they live in is also named Gilead), his mother is a “woman of the night,” his half-brothers don’t appreciate the fact that he will share in their father’s inheritance, and they kick him out of the family house (these dysfunctional loonies would have fit perfectly into my Welcome to Family Feud! post! Haha). Jephthah told his half-bros to go BUMP themselves (most of you know where I’m going with that. I’m trying to be a good Carletta. Haha), and instead of putting up a fight, he settled in a place called Tob. Jephthah was an outlaw (move around, Road Dogg and Billy Gunn! Haha), found some ride-or-die friends, they formed a chain gang of fighters, and they could tear up some serious BEE-hind (they were kicking carcass and taking names! Haha). 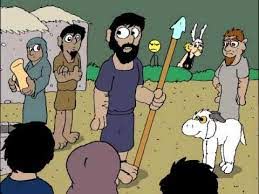 While Jephthah had garnered a reputation for being a “mighty fighter” (Judges 11:1 (KJV)), the Ammonite army invaded Israel. The Ammonites wanted payback for Joshua and the Israelites molly-whopping their homies during the Battle of Jericho (Break Down the Walls of Jericho!), as well as for Israel completely embarrassing them during the Exodus (AHHHHH! Look at those McGoofies from McDonalds!). Wetting themselves at the thought of an Ammonite attack (Niagara Falls all down their legs, y’all! Sorry. Haha), the elders of Gilead begged Jephthah to come back home and lead an Israelite attack against the Ammonites; they (the elders) would make Jephthah a “head” (not a king, but a king-like position) over the Israelites in Gilead. Jephthah agreed to lead the Israelites into battle (Mortal Kombat ain’t got NUTHIN’ on them-FINISH THEM! Haha), and the scripture notes the following:

God Almighty had given Jephthah divine confirmation to lead his (God’s) people into battle with the Ammonites; with God on our side, we can’t lose (Holy Ghost turn up! Aye! Haha)! Jephthah had a guaranteed victory against the Ammonites-God had given his divine stamp of approval (through the Holy Spirit coming unto him), and Jephthah was a world-class fighter (smack, crack, don’t react; smack, crack, don’t react. It’s like washing hair-lather, rinse, repeat. Haha). Do you think that Jephthah walked confidently in his guaranteed victory against the Ammonites?! OF COURSE NOT! Upon seeing the Ammonites, this flaky fondue stick began to doubt himself, doubt the one true God (the God who sent his son, Jesus Christ, to die on the Cross for our sins), and decided to follow the pagan ritual (pagan=false, phony, fake, fraudulent, second-rate, impostor “god” worship) of trying to cut a deal with God (WOW. Weak!). 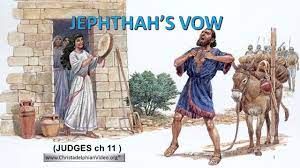 Jephthah made a “deal” with “god” (notice the little “g;” this foolishness wasn’t of the one true God (uppercase “G”)) that if he and the Israelites defeated the Ammonites, Jephthah would sacrifice (burn to death) whomever came out of his house to greet him when they returned home from victory. There are two major problems with this scenario: 1) God did not condone HUMAN sacrifice (only animals, though he may have expected an animal to come out)-the fact that this moron even suggested that proves that he wasn’t honoring the one and only true God; 2) did this idiot even think about who might come out first? How do you know that you wouldn’t be greeted by someone you love, such as a family member or a friend? Jephthah just blindly agreed to kill whomever happened to meet him outside when he and the Israelites returned from victory…with NO REGARD for whom it might be (I’M WITH STUPID!).

Sure enough, the one and only true God empowered the Israelites to defeat the Ammonites in battle (Hallelujah! Praise the Lord! Thank you, Jesus! God is good!), but guess what happened, everyone?! When Jephthah and the boys returned home to Gilead, Jephthah’s baby girl (roughly 12 years old), his only child, excitedly met him outside the door, dancing and prancing like 12 year olds are supposed to do! Let’s remember the ridiculously stupid deal that Jephthah made with “god;” if the Israelites defeated the Ammonites in battle, Jephthah would sacrifice (burn to death) the first person who greeted him outside the door when he returned home. Jephthah’s daughter was the first person to greet him outside the door when he returned home. 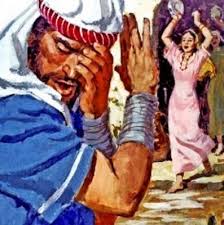 OH NO! This isn’t going to happen. Jephthah isn’t seriously going to kill his own daughter over a sham deal that he made with a sham god. Surely, he has the sense of a one-legged gnat to know that his deal meant NOTHING (it didn’t mean anything!), and that it was only through the God of Israel (the one and only true God) that he and the Israelites were victorious against the Ammonites. Jephthah can’t be THAT stupid, cruel and clueless…can he?!

This royal waste of space responded to his daughter in the following way:

Judges 11:35 (KJV)- Alas, my daughter! thou hast brought me very low, and thou art one of them that trouble me: for I have opened my mouth unto the Lord, and I cannot go back.

ARE YOU FLIPPING KIDDING ME?!?!?!?! Jephthah, you steaming piece of non-believing garbage! You’re actually going to burn your own daughter to death?! The very person that God gave you to love, provide for and protect, you’re going to burn to death over a fake deal with a fake, worthless “god?!?!?!” Can I shoot him, please?! PLEASE?!?!?! My “Samantha” is dying for some action (calm down, Carletta! Please forgive me, Lord. Woosah, woosah. Peaceful meadows, peaceful meadows)! 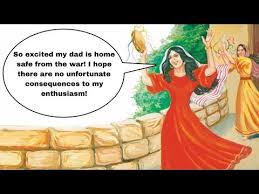 Jephthah the JAMOKE not only makes clear to his daughter that he WILL burn her to death (where is this child’s mother and those ruthless criminals who will bash adult skulls in, but at least protect the children?!?!?!), but as almost a slap in the face to her, he gives her two months to mourn with her friends, as she would never become a rebellious teenager, never marry, never have children, and never live life (I want to run him over with a MAC truck so badly, but I know that isn’t Christ-like. Haha). Needless to say, Jephthah’s daughter could not escape her IDIOT excuse for a “father” (he was in a king-like position in Gilead), and two months after declaring his daughter as good as DEAD, in a sham service to God, Jephthah brutally burned his daughter to death in a pagan ceremony (NOOOOOOOOOO!!!!!).

I know what many of you are thinking, “Why would God allow this to happen?!” I’ll be completely honest with you all, I don’t have the answer to that. Many things happen that we don’t like or understand, and although we’re justified in our anger and confusion, we must keep our eyes on God, maintain our faith in God (through our Lord and Savior, Jesus Christ), and trust/believe that God is going to use EVERY situation-good, bad, and ugly-to bring about his divine plan, will and purpose for our individual lives, and the world in general. God can ALWAYS bring good out of a TERRIBLE situation (Jephthah died a brutal death-he wasn’t mourned or buried; his body was left to rot in the open-Oh, doggies! Mommy has some food for you!); if we understood everything about God, he wouldn’t be GOD. With this being said, I have dreams of going Texas Chainsaw Massacre all over Jephthah’s punk a-. I’ll stop there. Haha.

Jephthah died a worthless, unloved loser (no one cares about your battle victories, clown! You’ll forever go down in history as a child killer and one of the worst “Father of the Year” candidates EVVEEERRRRR!), while his daughter is still mourned in various Jewish ceremonies today (the Jewish community mourns Jephthah’s daughter’s death during the winter season, as it’s believed that she was killed during the winter). 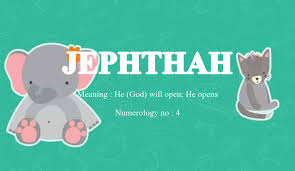 To all of the fathers who weren’t born yesterday, are smarter than the average bear (and a 5th grader. Haha), have the sense of a sun-dried raisin, and don’t regularly drink Moron’s Milk with their frosted flakes in the morning (they’re GREEAAATTTT! Haha), THANK YOU! GOD BLESS YOU! YOU HAVE MY RESPECT (I can put the Smith & Wesson down. Haha)! Given the raging stupidity and cruelty all up, around and through this story, I will not do a modern-day remix of this story, as there’s no way to make child murder funny (I do have some standards. Haha). Never fear, though; the modern-day remixes shall return tomorrow (let’s get it!)!

In the meantime, here are two lovely videos from Tektontv and Natalie Tatar, further detailing the story of buttwipe Jephthah and his lovely daughter (Tektontv’s video tries to add a bit of humor to this unfortunate story; not bad. Haha).

I hope that you all enjoyed the videos and post! I love you all, God bless you all, and I’ll see you all on the next one! 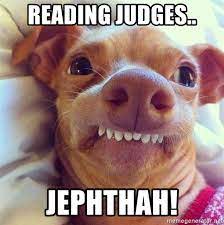 10 thoughts on “Jephthah, The Jamoke!”