It’s that time of year again, y’all! People are spending obscene amounts of money on food that will inevitably go to waste (we DISGUST me! Haha jkjkjk…sort of. Haha), Dad’s preparing to lose his ever-loving mind when the Lions and Cowboys get molly-whopped by Houston and Washington, respectively (I’m kidding! I’m kidding! Before any Lions and Cowboys’ fans start attacking me with their flaming fingers of fury, I’M JUST KIDDING! I like to joke around. Haha), and family members are going to pretend to like each other because they want a piece of Momma’s sweet potato pie (watch Uncle Greg pull an okie-doke on everyone and buy a pre-prepared PUMPKIN pie from Wal-Mart. Shameful! Haha). Today is Thanksgiving, but in typical Carletta fashion, I have something to say about it (‘cause that’s how I roll!). Haha.

I don’t believe that we need a special day to thank God for his goodness (his love and forgiveness), grace (giving us good things (blessings) that we DON’T deserve) and mercy (not giving us the bad things (punishments) that we DO deserve). As a devout Christian (Jesus Christ is my Lord and Savior! Hallelujah! Holy Ghost FLEX! Haha), I believe that we should always have a heart of thanksgiving.  God woke us up this morning. God didn’t allow any hurt, harm or danger to come to us during the night. Despite the fact that we’re all sinful (sin refers to anything that we say, do, don’t do, and/or think, that God doesn’t like) pieces of trash (I mean that in the nicest way possible. Haha), God didn’t just allow us to die in our sins, and suffer eternal torment in Hell.

Instead, God loved us so much that he sent his only begotten Son (Jesus Christ, God’s Son and God in the flesh) to die on the Cross for our sins, that if we would 1) repent of our sins (ask God to please forgive us of our sins and help us to stop sinning) and 2) believe in Jesus (believe that Jesus is God’s son, that he died on the Cross for our sins, that he rose from the dead (3 days later) with all power in his hands, that he’s sitting at God the Father’s right hand in Heaven, and that he’s coming back to take his children (all believers in Jesus Christ) home (to Heaven), and to judge/destroy this wicked world), we would not perish (die in our sins and suffer eternal torment in Hell), but have everlasting life (we’ll be partying with Jesus in Heaven forever, y’all! Aye! Turn up! Say it with me now! Ain’t no party like a Holy Ghost party, ‘cause a Holy Ghost party don’t stop! Party over here! Ooh-ooh! Party over here! Ooh-ooh! Haha). 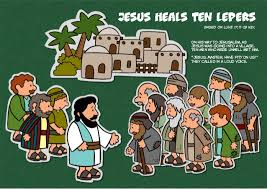 God deserves our praise, worship, adoration and gratitude at all times, not only on Thanksgiving (or Christmas…or payday. Haha). As such, I’d like us to visit one of countless stories of gratitude in the Bible (this will be my shortest article to date; I can get to the point once in a while. Haha). Let’s explore the story of Jesus healing the ten lepers, shall we?

In the 17th Chapter of Luke, Jesus and his twelve disciples (his homies! His homeboys! His road dogs! His Day Ones! His Gs! His buddies! His pals! His partners! His best friends! His home skillet biscuits with butter and jelly on top! His…sorry. I’ll stop. Haha) are in the middle of Jesus’s three-year earthly ministry (teaching and preaching about the Kingdom of God). As Jesus was on his way back to Jerusalem, he walked along the border of Samaria and Galilee. While walking, ten lepers (leprosy is an infectious skin disease, typically causing white or red skin patches with reduced sensation, numbness, and weakness in one’s hands and feet) suddenly see Jesus passing by, and knowing his power (he was God in the flesh and had been performing miracles left and right, y’all! He was a G…OD! The bomb.com! An A1 BOSS! Haha), they immediately call out to him and ask him to have mercy on them (they needed healing, y’all!).

Jesus responded by telling them to go show themselves before the priest. Let’s put a brief pen here. After reading that last sentence, some of you may be wondering why Jesus would send the lepers to the priest. The priest wasn’t a doctor (he knew as much about medicine as Cookie Monster, Ronald McDonald and Clifford the Big Red Dog did! Get out of here! Haha)! The priest couldn’t perform miracles! What could the priest do? The lepers had appeared before the priest one time before, only for the priest to turn them away, saying that they were unclean (the priest was clearly smelling his own behind, acting like his “you know what” didn’t stink! He had his head so far up his own behind that he was giving himself a colonoscopy (Ewww!)! Haha.). Why would Jesus send the lepers back to that loser?!?! I’m glad that you all asked that question! Haha.

The lepers had faith in Jesus, meaning that they fully and wholeheartedly trusted and believed in him (no questions asked!). As such, they didn’t think twice when Jesus told them to go to the priest (they didn’t run that mouth or give him any lip! Take notes, kids! Bumping your gums gets you NOWHERE! Haha). As the ten lepers were on their way to the priest, Jesus healed them (that was quick! Of course it was! Nothing is impossible for God to do! Y’all better recognize! Haha). The lepers have been healed! The lepers have been healed! What happened next is truly inspirational (Get your pens and pads ready, folks! I’m taking y’all to school today (oh, y’all thought y’all were out of school until Monday?!)! Haha):

Luke 17:15-19 (KJV)-And one of them, when he saw that he was healed, turned back, and with a loud voice glorified God, And fell down on his face at his feet, giving him thanks: and he was a Samaritan. And Jesus answering said, Were there not ten cleansed? but where are the nine? There are not found that returned to give glory to God, save this stranger. And he said unto him, Arise, go thy way: thy faith hath made thee whole.

Jesus has just healed ten lepers of their lifelong disease in a matter of seconds (without breaking a nail or a sweat, I might add! Haha), but only ONE of them turned around to thank Jesus for what he had done (oh, no they didn’t! Awwwwww, hecky naaawwwwww!!! What kind of trifling mess is this?! Y’all better turn y’allz “see spot run” behinds  around and show some gratitude! Jesus didn’t have to heal y’all of anything! He could have pretended like he never heard y’all (he could have ignored y’all without even trying!), went about his merry way, and y’all would’ve been sitting there, looking like next year’s Christmas tree (ornaments and all, y’all!)! I ought to-here’s a Snickers, Carletta. You get a little loopy when you’re hungry. Please forgive me, Lord. Y’all know that I need help. Haha).

Jesus asked the lone ex-leper where the other nine were, though he already knew where they were. The other nine had continued walking, not bothering to thank Jesus for his miraculous deed (morons!). Jesus was well pleased with this ex-leper, however, as he actually showed how much he appreciated what Jesus had done for him (WINNER!). This ex-leper humbled himself before Jesus, fell down at Jesus’s feet, and he thanked Jesus for healing him (I always knew that I liked that guy! He just screamed “leader” to me! I’m talking about the ex-leper, not Jesus. I would never disrespect Jesus like that. I don’t have a death wish. Haha).

Jesus ended his conversation with the ex-leper by telling him to go about his way; his faith had made him whole. The ex-leper believed that Jesus could heal him, he followed Jesus’s instructions (with no hesitation), and the moment that Jesus had healed him, he IMMEDIATELY thanked him for what he had done (that’s a good boy! That’s a good boy! Get down! Get down! *Rubs the ex-leper’s belly and gives him a Scooby Snack* Haha). 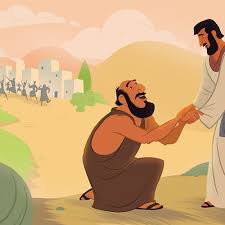 God is so good; he’s better to us than we are to ourselves (let the church say, “Amen!”). God loves us unconditionally and is willing to do anything for us, but he wants and expects us to show our gratitude. We can’t make it in this world without God, and when we truly understand this and take it to heart, it becomes so easy for us (like second nature) to thank him for his goodness…everyday…year-round.

As we prepare to gain 50 pounds over Thanksgiving weekend (don’t get mad at me! Y’all know that I’m telling the truth! I’m an outspoken ostrich! I call it how I see it! Haha), let us make sure that we’re giving God the honor, glory, praise, and THANKS that he ALWAYS deserves; had it not been for him, you would’ve burned the kitchen down, attempting (but not succeeding!) to make southern-style stuffing, a long time ago! Haha.

I will not do a modern-day remix to today’s story, but will instead leave you all with a wonderful video from Saddleback Kids, summarizing the story of Jesus healing the ten lepers beautifully (it’s such a cute video!).

I hope that you all enjoyed today’s post! There are plenty more where that came from! Until next time, happy holidays! I love you all, God bless you all, and I’ll see you all on the next one! 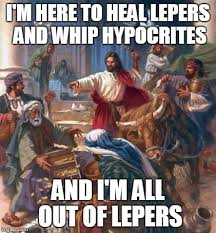 10 thoughts on “Show Jesus Some Love!”