All Hail, King Joash (That Boy is HOW

Children are a blessing (even when they act like they don’t have any home training, start popping off at the mouth (they have more lip than Jay-Z at a Botox convention. I don’t even listen to Jay-Z, but LAWD, that’s a lot of lip! Haha), and make you want to forget your Sunday School language (please take the wheel, Jesus! Please control my tongue! Haha)). God gives us (by “us,” I mean Y’ALL. I don’t have any children. Haha) children to love them, nurture them, protect them, provide for them, and teach them how to become honest, hardworking, God-fearing adults in the future. We all want the best for our children-we want them to work hard, do well in school (even if we have to do an impromptu “Ice Bucket Challenge” to get them out of bed in the morning. IT’S TIME FOR SCHOOL!), get good jobs, treat everyone with love, dignity, and respect, help their fellow man (or woman), and become valuable members of society.

In the 11th Chapter of 2 Kings, here’s the skinny (that’s slang for “here’s what’s going on.” Haha). The king of Judah at the time, Ahaziah, has just been killed by Jehu. A little background here. If we’ll recall from my previous post, Witches Get Stitches!, King Ahab and Queen Jezebel were running a demon-inspired muck in Israel (they were vile, horrible people. King Dipstick Doofus and Queen Braindead Bat were the most evil king and queen in Israel’s history-they hated God Almighty (he loved us so much that he sent his darling Son, and our Lord and Savior, Jesus Christ, to die on the Cross for our sins-bad things that we say, do, don’t do, and/or think, that God doesn’t like), hated God’s people (the Israelites and anyone who worshipped God), and they did everything in their power to corrupt the Israelites (turn them against God and toward that lava-loving LOSER, Satan) and eliminate God from the country of Israel (you can’t eliminate God, you morons! Were you all hit in the head, or is your stupidity a pre-existing condition?!).

Fast forward: these flaming imbeciles were allowed to breed, and they had a daughter, Athaliah. Athaliah later had a son, Ahaziah. While Ahaziah (Ahab and Jezebel’s grandson; Athaliah’s son) was the king of Judah (he became king at age 22, and was just as big of a piece of monkey trash as his parents were…and I’m being nice. Haha), Jehu (one of God’s prophets and future king of Israel) killed him (God Almighty was punishing the entire household of Ahab (his family/descendants) for the terrible things that Ahab and Jezebel had done to God’s people (murdering them, turning them against God, etc.). When Athaliah found out that her beloved son, Ahaziah, was dead, she proceeded to turn on and murder HER OWN grandsons (are you flipping kidding me?!?! Are you nuts, crazy, stupid, or all three?! No wonder you’re Ahab and Jezebel’s daughter (the apple didn’t fall far from the tree!)!!! You’re all a bunch of sick, twisted, evil MORONS! Presenting, the newest member of the Scum of the Earth Society, Athaliah! Wow, Athaliah’s a fungus-infested toe rag!).

While Athaliah was busy slaughtering her own family (you wicked witch of the West!!!!), her sister, Johosheba, quickly took Ahaziah’s newborn son (Athaliah’s 1-year-old grandson), Joash, with her, so that he wouldn’t be murdered (Praise the Lord! We finally have ONE member of this dysfunctional family with the sense of a BAT (a good bat, not a dingbat. Haha)!). Johosheba hid Joash in the Lord’s temple for 6 years, and during this 6 year period, Athaliah became the queen of Judah (oh, the horror!). When Joash was 7 years old, Jehoiada (a prominent priest in Judah) took him out of the temple; he made sure that he was well-protected when going to get little Joash:

2 Kings 11:5-11(KJV)-And he commanded them, saying, This is the thing that ye shall do; A third part of you that enter in on the sabbath shall even be keepers of the watch of the king’s house; And a third part shall be at the gate of Sur; and a third part at the gate behind the guard: so shall ye keep the watch of the house, that it be not broken down. And two parts of all you that go forth on the sabbath, even they shall keep the watch of the house of the Lord about the king. And ye shall compass the king round about, every man with his weapons in his hand: and he that cometh within the ranges, let him be slain: and be ye with the king as he goeth out and as he cometh in. And the captains over the hundreds did according to all things that Jehoiada the priest commanded: and they took every man his men that were to come in on the sabbath, with them that should go out on the sabbath, and came to Jehoiada the priest. And to the captains over hundreds did the priest give king David’s spears and shields, that were in the temple of the Lord. And the guard stood, every man with his weapons in his hand, round about the king, from the right corner of the temple to the left corner of the temple, along by the altar and the temple. 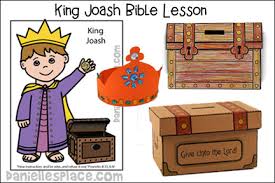 Alright, now! Let someone be crazy enough to try to hurt or kill Jehoiada and/or Joash; Jehoiada’s guards were ready to blast some fools (in the words of Al Pacino in Scarface, “say hello to my little friend!” Haha. Please forgive me, Lord. Y’all know that I need help. Haha)! I’ve said it once, and I’ll say it again: Jehoiada and Joash were WELL protected. Haha.

As soon as Jehoiada took Joash from the temple, he immediately put a crown on Joash’s head, making Joash the new king of Judah…at age 7 (we have a kid king! We have a kid king! While most 7-year-olds are eating their own boogers (EWWWWWW! Haha), digging in their behinds, and playing with toys (I think Superman is better than Batman! No! I think Batman is better than Superman!), Joash is now the king of Judah! Talk about growing up quickly (he had help, though. God wasn’t going to allow a child to become King without proper supervision and righteous adults in his corner. Haha).

Once Jehoiada crowned Joash the new king of Judah, he gave Joash a copy of the covenant (Jehoiada promised God Almighty that Joash would rule the people of Judah in a godly fashion, that the people of Judah would be God’s people (they would listen to, fear, revere, honor, worship, praise, and bless God Almighty), and that he wanted to tear down the temple of Baal (Baal is a fake “god” (one of Satan’s pals, whom Ahab, Jezebel, Athaliah, and Ahaziah worshipped). The only true God is God Almighty, who sent his Son, Jesus Christ, to die on the Cross for our sins (bad things that we say, do, don’t do, and/or think, that God doesn’t like), that if we would repent of our sins (ask God to please forgive us of our sins and please help us to stop sinning) and trust/believe in Jesus (Jesus is God’s Son, Jesus died on the Cross for our sins, Jesus rose from the dead-3 days later-with all power in his hands, Jesus is back in Heaven with God the Father, and Jesus is coming back to take his children (all believers in Jesus) home (to Heaven) and to judge/destroy this wicked world), we would not perish (die in our sins and suffer eternal torment in Hell), but have everlasting life (we’ll be partying with Jesus in Heaven forever, y’all! Aye! Holy Ghost turn up! Ain’t no party like a Holy Ghost party, ‘cause a Holy Ghost party don’t stop! Party over here! Ooh-ooh! Party over here! Ooh-ooh! Haha)). 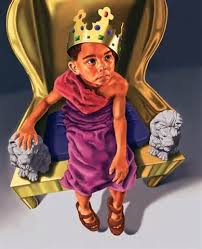 As such, Jehoiada proceeded to go to the temple of Baal and 1) smash the altar down (BUMP that buster, Baal! Haha), 2) destroy the idols (statues of fake, fraudulent, impostor, second-rate “gods”), and 3) put Mattan (the priest of Baal) to death for his devil-worshipping foolishness (thata’ boy, Jehoiada! I always knew that I liked Jehoiada! He was a Holy Ghost gangsta! A theological thug! A ride-or-die renegade for the Lord! A true OG…as in, OF GOD).

Jehoiada ordered his guards to stay on guard at the Lord’s temple-protect God’s temple at all times, and at all costs (no ignoramuses allowed! Haha). Jehoiada and his guards brought King Joash (he’s so cute!!!!) down from the temple of the Lord, and into the palace (where Joash’s throne was located). As King Joash took his place on the throne (with milk and cookies for days! I need to stop. Haha), his wicked grandmother, Athaliah, was killed (Oh, happy dayyyy (oh, happy dayyyy!)! Oh, happy dayyyyyyy! When Jesus washed (When Jesus washeddddd!!!!) (3x)…washed all my sins away. Haha), and the people of Judah rejoiced! Hallelujah! Praise the Lord! Thank you, Jesus! God is good! Athaliah is dead (ding-dong, the dipstick is dead!)! Joash is king! The temple of Baal has been destroyed! Peace and love finally abide in the land!

I absolutely LOVE this story! Regardless of who or how old we are, God can use us for his glory and to fulfill his purposes. God will always trump (beat) Satan; good will always trump evil; the righteous will always trump the unrighteous (let the church say, “Amen!”). Kids, never think that you’re too young to be used by God. God loves you, and if he has work for you to do, he’ll make sure that you have everything that you need to do it (he’ll never send us out unprepared! All that we need to do is trust him and be ready to do his work!). When we follow God, great things happen. 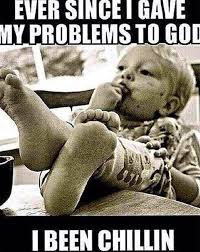 Given the length of today’s story, I will not do a modern-day remix of it. No worries, though (I’m not THAT trifling! Haha)! I have instead included a wonderful video from Bible Friends, summarizing the story of King Joash beautifully.

I hope that you all enjoyed today’s post (I know that I did. Haha)! Stay tuned for more exciting Bible stories! Until then, I love you all, God bless you all, and I’ll see you all on the next one! 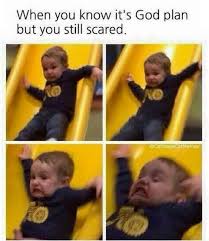 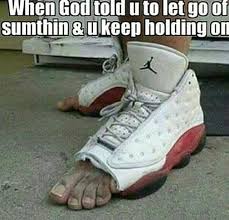