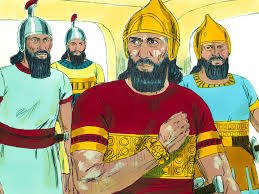 Who didn’t love going to the doctor as a kid (come on! You know that you loved getting shots, seeing your blood ooze like lava, and getting those cheap suckers and $0.25 games that broke as soon as you walked out of the office for your pain and suffering!)?! Whether we chose to visit Dr. Spud, or our parents dragged us to his office by our legs (SO MUCH FUN…except when I had to pick twigs out of my behind. Haha), we all had to visit the doctor from time to time (when we were sick, to get our yearly physicals/checkups, and/or to get our shots for school).

Although we never liked the idea of going to the doctor, the appointments were never as bad as we made them out to be (unless your doctor talked ridiculously close to your face with hot, STANK breath-Lord, please bless this man with some Tic-Tacs, Icebreakers, Dentyne, and assorted breath mints IMMEDIATELY! I’M MELTING! THE PRECIOUS!), and we always realized that our fear of going to the doctor was much worse than the actual appointment itself (we felt like Boo-Boo the Fool afterwards. Haha).

While God has blessed us with many great doctors, dentists, and specialists (what’s good, my psychiatrists?!?!?!?!?!?! Haha), God himself is the ultimate doctor-he’s the doctor that never fails, and has never lost a case (Hallelujah! Thank you, Jesus! Praise the Lord! God is good!). No matter what our sickness is (cancer, diabetes, heart disease, the sickness of STILL thinking that SUGARLESS Krispy Kreme donuts are a good idea!!!!!), if we trust and believe in God’s power (in the mighty name of Jesus Christ), God can and will perform miracles! 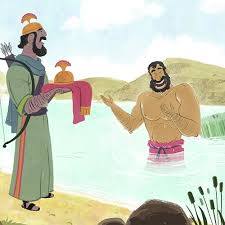 In light of today being Day#3 of my “Are These Dudes Nuts?!” series, we’re going to visit a man who tried to question God’s healing power-Frosty the Snowman himself, Naaman the Leper.

In the 5th Chapter of 2 Kings, we’re introduced to a man named Naaman. Naaman was under the rule of the Aramian King (what’s your name, King? IT DOESN’T MATTER WHAT YOUR NAME IS!!!!! That’s for you, wrestling fans…if you smell what The Rock is cooking. Haha), and he was a great soldier (he tore up some SERIOUS enemy tushy, y’all! He was chewing bubble gum, kicking butt, and taking names! Haha). Naaman had led the Aramian army to many great victories, but he had one slight problem…Naaman was a leper.

Leprosy is an infectious disease where one’s outer skin becomes covered in white or red bumps, and one’s skin becomes extremely sore, numb, and weak. Just think: Naaman was the commander of the Aramian army, knocking fools out left and right, yet he oftentimes was so sore and weak that he could barely move, couldn’t feel himself move, and looked like a chandelier and frosted Christmas ornament all wrapped into one (I’m not making fun of people with leprosy! I just like to find the humor in every situation. Haha). How was Naaman able to accomplish such a great feat with such a terrible disease? That’s an easy one! It was God and God alone (Praise the Lord!)!

During one of Aram’s conquests, a few select losers decided to kidnap a young Israelite girl (can I “kidnap” their man cards?! Operation Revoke Your Man Card is underway…pansies! Haha), bringing her to Naaman and his wife, where she became Naaman’s wife’s servant. This young girl told Naaman’s wife that her husband could be healed of his leprosy by the Samarian prophet, Elisha (Elisha was one of God’s prophets and Elijah’s mentee; Elijah was God’s greatest prophet), and the King of Aram sent a letter to the King of Israel to heal Naaman (you need to be healed, Naaman! Now GIT! Haha). 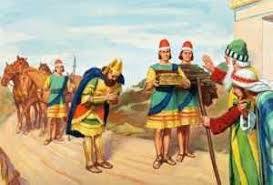 The King of Israel was a clueless jamoke and knew that he couldn’t heal Naaman of his leprosy-he tore his robe (are you having a mental breakdown, dude?!), explained that only God could heal Naaman (he at least had the sense of a bat. Haha), Elisha heard about this, and Elisha sent for Naaman (YO, NAAMAN?! COME OVER HERE!). Naaman arrived at Elisha’s front door, and Elisha sent one of his messengers to deliver the following message to Naaman:

2 Kings 5:10 (KJV)-And Elisha sent a messenger unto him, saying, Go and wash in Jordan seven times, and thy flesh shall come again to thee, and thou shalt be clean.

If Naaman washes himself in the Jordan River, he’ll be healed of his leprosy, y’all (bumps, be gone!)! Instead of Naaman being grateful for this life-changing information and doing what Elisha told him to do, this clown and a half starts complaining! Wah! Wah! Wah! Why didn’t Elisha himself come out and talk to me?! I’m the great and mighty warrior, Naaman! I’m all that and a bag of chips on the battlefield (being cockier than roosters isn’t cute. Haha)! I have street cred! Elisha needs to greet me! Why hasn’t Elisha greeted me?!

Why do I have to wash in the Jordan River?! That river is filthy! There’s no telling what kind of bacteria and diseases are swimming around in there! The Jordan River has cooties! The Abana, Pharpar, and Damascus Rivers are a lot cleaner than the Jordan! Why can’t I wash in one of those rivers instead?! Wah! Wah! Wah! Blah! Blah! Blah! Garble! Garble! Garble! Will someone please get this dipstick some warm milk and his blankie?! He clearly needs a nap and a WAMbulance!!!! 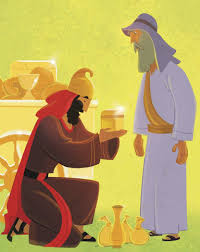 Naaman’s messenger explains to him that his message is straight from Elisha, which is straight from God (you better recognize, boy!)-shut your piehole, and go wash in the Jordan River, Naaman! Naaman pulls his head out of his rear end (it was so far up his backside that he was giving himself a colonoscopy-ouch. Haha) and goes to the Jordan River to wash himself. Being the scared and siddity weenie that he is, Naaman didn’t fully immerse himself in the Jordan River (let’s go swimming!), but simply dipped himself in the Jordan seven times. God, being the gracious (giving us rewards we don’t deserve) and merciful (not giving us the punishments we do deserve) Heavenly Father that he is (remember, he loved us so much that he sent his son, and our Lord and Savior, Jesus Christ, to die on the Cross for our sins), still loved Naaman and instantly healed him of his leprosy! His leprosy is gone! His leprosy is gone!

Naaman quickly ran back to Elisha’s house and recognized that there was only one true God-the God of Israel who had just healed him of his leprosy (Hallelujah!)! Naaman wanted to pay Elisha for what he had done, but Elisha would not take any money or gifts from Naaman (I didn’t help you for the bling-bling or the ching-ching; I was simply doing God’s will. My man! Haha).

Elisha’s servant, Gehazi, thought that Elisha was being too nice to Naaman (uh-uhhhhh, Elisha! This sucka owes you something! You just helped to heal him of his leprosy! Make him give you some gold, some silver, some frankincense, something!). As such, this greedy imbecile went after Naaman, lied and told him that Elisha had changed his mind and wanted some silver and clothing, Naaman gave Gehazi the silver and clothing, and Gehazi ran home, like he had actually done something impressive (moron. Haha).

When Gehazi returned to Elisha, Elisha asked him where he had been (already knowing where Gehazi had been and what he’d done). Gehazi lied through his buck teeth and said that he hadn’t been anywhere (Liar! Liar! Pants on fire!), and as punishment for his greed (and as Chris Jericho used to say, for being a STUPID IDIOT! Haha I’m sorry.), Elisha told Gehazi that he (Gehazi) would become a leper-as soon as Gehazi began to walk away, his skin turned white as snow (I’m dreaming of a white Christmas!), and he became a leper! HAHAHAHAHAHA! You tried to be a selfish scumbag, Gehazi, and it epically backfired! Not only did you not get to keep the silver and clothes that you stole from Naaman, but you now have Naaman’s former disease-you’re a loser and a leper! HAHAHAHAHAHAHAHA! God doesn’t like ugly! HAHAHAHAHAHAHAHA!

I love this story! I will not do a modern-day remix to this story, as I have found two great YouTube videos that explain things beautifully (I don’t want to steal their shine. Haha)! The first video is from 1955, whereas the second video is from 2014-they are both AWESOME (y’all know that God has swag! Haha)! Enjoy! 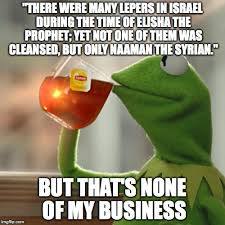 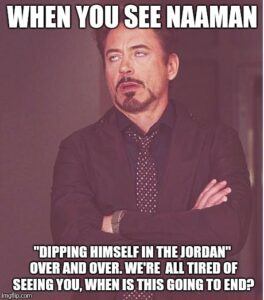 18 thoughts on “The Jordan Has Cooties!”