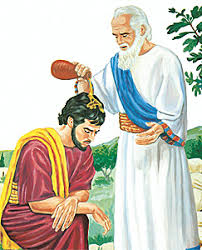 I love a good underdog story (that’s my dawg right there! Roof! Roof! Roof! Roof!)! I’m the type of person who loves to see the “little guy”-that person whom everyone counts out, doesn’t believe in, and doesn’t pay any attention to-overcome great odds to become successful (Buster Douglas knocking Mike Tyson out was glorious! Haha Don’t get salty and vandalize my house, Mike Tyson fans. Haha). Despite what the naysayers say (you should put Ex-Lax in their coffee. Haha, just kidding! Jesus loves the bougie children, all bougie children of the world…), we are all fearfully and wonderfully made by the hands of God (we are all masterpieces); God doesn’t create junk. As such, God has given all of us various talents, skills and abilities to do great things for him, even if we or those around us don’t realize it yet. When God calls you to do something (*Ring-a-ling-a-ling* Seanny, my man! How are you doing today?!), he’s not going to allow anyone or anything to get in the way of that (move, Rick, get out the way, get out the way, Rick, get out the way!). This brings us to the story of God choosing David to become the new King of Israel.

In the book of 1 Samuel (Holy Bible), we begin with the first King of Israel, Saul. God used the prophet, Samuel, to anoint Saul as King (pour oil over one’s head or body to show that he/she is God’s chosen vessel; the Holy Spirit comes upon that person and leads him/her in his/her daily life and position). God used King Saul to do mighty things (such as saving his people, the Israelites, from the threats of those ungrateful drops of snot, the Philistines), but Saul soon started clowning, y’all! Someone had slipped Saul a sip of the stupid juice, as he began to disobey God. 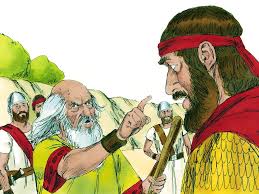 1) Samuel (who God was using to guide King Saul) told Saul to wait as long as seven days for him (Samuel) to offer a sacrifice to God before his army went into battle with the Philistines. Samuel hadn’t arrived during that time, but instead of waiting on God, Saul went ahead and offered a sacrifice himself (1 Samuel 13: 8-14 (KJV)). Who told you to do that, Saul?! Who told you to do it?! I know! I know! NO ONE!  Negative six brownie points for you! Strike 1!

2) King Saul had serious beef (and we’re not talking brisket) with the Amalekites; they were public enemy #1 to Israel, y’all (bitter rivals!). The Amalekites had attacked the Israelites in the wilderness while they were escaping Egypt with Moses (“I See The Red Sea! Pharaoh’s A Weenie!” ->https://jesusbedtimestories.com/i-see-the-red-sea-pharaohs-a-weenie/). God tells Saul to blast those fools (completely destroy everything that belongs to them; no one messes with God’s children!), but Saul lived on Dipstick Drive, turned onto Loser Lane, and preserved all of the Amalekites’ cattle (forget the cattle! God has steak and pork chops to last a lifetime (and then some)! He told you to smash EVERYTHING!!!!). WEAK! Strike 2!

3) After Saul disobeyed God for a second time, and Samuel confronted him about it, Saul tried to make excuses for himself (The soldiers brought the cattle, not me! We were going to sacrifice them to God, I swear!). Revoke your man card, Saul. You’re softer than Auntie Anne’s pretzels and have the backbone of a Twizzler. You’re done, Saul. You…are…done! Strike 3! You’re out!

Samuel gave King Saul a spiritual superkick to the face (a little Sweet Chin Music!), telling him that obedience was better than sacrifice, that the Lord regretted ever making him King of Israel (OUCH!), dropping him like a bad habit (though Samuel felt bad about it), and ensuring him that God would appoint a new King (you’re fired!!!!! Haha). In steps David (things are getting good!).

In the 16th Chapter of 1 Samuel, God tells Samuel to stop mourning Saul (get over him already! Haha) and pay Jesse the Bethlehemite a visit; God has decided to make one of Jesse’s sons the new King of Israel. Samuel was afraid that Saul would try to kill him (anointing a new king while the reigning king was still alive was a dangerous move; Saul will get a firsthand look at my Master’s degree in Shankology; I’m quite proficient in the art. Haha jkjkjk), but God told him to take a female cow, offer it as a sacrifice to the Lord, take Jesse with him (Saul can just sit there and shut it up. Haha), and he (God) would show him what to do.

Samuel obeyed God (he learned from Saul’s mistake. Haha), visited Jesse and his sons, sanctified them (made them clean, pure and holy), and took them with him to make the sacrifice to the Lord. When Samuel sees Jesse’s oldest son, Eliab, he assumes that he HAS to be the next King-he looks like king material (silly Samuel; stay in your lane, boy! Haha). God told Samuel that he could care less about one’s outer appearance; he cares about a person’s heart-that’s where the money is (I smell greenbacks! Haha). As such, each of Jesse’s sons came forth, one by one, and Samuel was rejecting fools like Dikembe Mutumbo rejects jumpshots (BOOM! REJECTED!!!!!). Samuel then asked Jesse if he had any more sons (because the first 7 weren’t cutting it. Haha), and Jesse answered as follows:

1 Samuel 16:11 (KJV)–There remaineth yet the youngest, and, behold, he keepeth the sheep. And Samuel said unto Jesse, Send and fetch him: for we will not sit down till he come hither.

Fetch me the boy! Jesse’s youngest son, David, tended to the sheep and wasn’t respected by his brothers-he was dirty, smelly, in the sun all day, and didn’t have much money (I know they aren’t talking! Last time I checked, they weren’t swimming in $100 bills, and they certainly didn’t smell like Axe and potpourri. Haha). As soon as Jesse presented David, God told Samuel to anoint him as the next King of Israel; he was a man after God’s own heart…and he wasn’t too bad looking either (you handsome hunk of manliness, you! Haha). Samuel anointed David in front of his family (bring on the body oil! Don’t hate, bros! Haha), and at that very moment, the Spirit of the Lord came upon David (and simultaneously left Saul-thank you, Jesus! Bump Saul! Haha). Israel’s new King has been chosen (we’re popping bottles of cider all night long! Haha)! In a funny twist, David next sings for Saul (I can imagine the song now: “I’m a Barbie Girl” remix-I’m Israel’s new King, I love to dance and singggggg, God says I’m ready, you’re looking jelly (that’s short for jealous); if you had just obeyed, you maybe could have stayedddddd, but since you did not, I’ve taken your spot (I’m so cheerful, never fearful, Go-o-liath!); God has a sense of humor, y’all! Haha.

Remix time! Put down the paintball gun (bullseye!), take off the mask, and let’s get busy! NOTE: I will be utilizing modern day language, technology, and ways of living in this story, as we’re picturing this happening today. 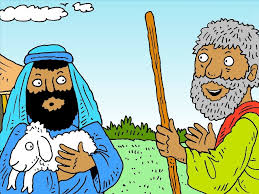 *After King Saul royally messes up, and God decides that he’s no longer fit to be the King of Israel (haha, that jamoke), he sends his prophet, Samuel, to anoint Israel’s new King. He can’t just go any kind of way, though; God makes sure that Samuel is fully prepared to complete the task at hand*

GOD ALMIGHTY: Samuel, stop walking around here, mourning Saul. He messed up. Are you trying to be Snow White’s 8th dwarf, Mopey? Fill your horn with oil and go visit Jesse the Bethlehemite; I have chosen one of his sons to be Israel’s new king.

Samuel: How can I do that, God? Saul is still alive, and if he catches me trying to anoint his replacement, he’ll kill me.

GOD ALMIGHTY: Boy, have you forgotten who I am? I’m God. I created the world and everything in it in six days; I said “Let there be,” and it was. I created Saul-he can’t do anything that I don’t allow him to do. Trust me, son, you don’t have anything to worry about. I’ve got this!

Samuel: Please forgive me, God. I get a little scatterbrained sometimes.

GOD ALMIGHTY: I know, son. I created you that way. Haha Anywho, you’re going to take a female cow, say that you’re sacrificing it to the Lord (that’s ME!), bring Jesse and his sons with you to the sacrifice (for the love of me, tell his sons to take a shower with SOAP and WATER! I don’t want any STANKY kings!), and anoint Israel’s new king there. I’ll show you exactly how to do everything. 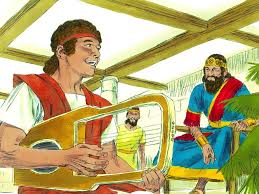 *Samuel obeys God (don’t be a Saul. Haha), takes the female cow for the sacrifice, visits Jesse and his sons, makes them all take 5 minute showers each (sanctification involves becoming clean, pure and holy), and takes them with him to the sacrifice site. Here, Jesse presents his sons to Samuel. Who is Israel’s new king?*

Jesse The Bethlehemite: Here are my boys, Samuel! I’m so happy right now, I don’t know what to do! One of my boys is about to become king, and we’re about to move out of the hood (sit down, Jesse. You don’t know what “the hood” is. Haha)! Bye-bye, mustard sandwiches (hey, I like those. Haha)! Here’s my oldest son, Eliab.

Samuel: That’s a king right there! My man works out (look at those muscles! I could grate cheese on those abs. Haha), he’s handsome (he’s a ladies’ man. Haha), and he just looks like a king!

GOD ALMIGHTY (to Samuel): Slow your rolls, partner! In choosing Israel’s new king, I could care less about the man’s outer appearance (even if he does make Channing Tatum cry. Haha); I care about his heart. I want Israel’s new king to be a man after my own heart.

Samuel: Please forgive me, God. I got a little carried away. Haha

*Jesse presented seven of his sons to Samuel, but none of them were qualified for the job (these candidates are hot garbage. Haha jkjkjk). Samuel knows that things can’t end this way-God always gets what he wants.*

Samuel: Wow, this has been disappointing (no offense, fellas. Haha). Jesse, do you have any other sons?

Jesse The Bethlehemite: I have my youngest son, David. He’s a garbageman for the city, always comes in smelling like rotten bananas and death, and doesn’t make enough to pay his portion of the rent (this stuff isn’t free! No offense to those of you who pick up the garbage. Jesus and I love you, I’m sure that you make good money, and your job is very important. Haha).

Samuel: Go get David. I’ll wait for you. We can’t continue with God’s business until he arrives.

Jesse The Bethlehemite: Gah, my cellphone is dead (someone forgot to charge it this morning!). Boys, wait right here. I’ll get in the station wagon and go get your brother. 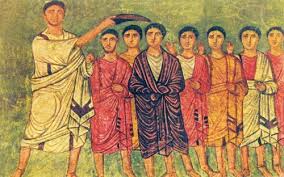 *Jesse makes David take a shower and brings him to Samuel. We don’t have all day to wait! Haha*

GOD ALMIGHTY: Get up, Samuel! He’s our guy; Israel’s new king! He has a heart after my own, and he’s not bad to look at either (he’s someone people won’t mind taking orders from. Haha). Anoint him with the oil.

Samuel: Whatever you say, God!

*Samuel anoints David with the oil, pouring it all over him (that boy’s slicker than butter! Haha). At that very moment, the Holy Spirit leaves Saul (move around, chump!) and comes upon David (put her there, champ!). Israel has a new king! Pop the fruit juice and Coca-Cola! It’s boogie down time! We all know that David likes to dance (“King David: Royal Rump Shaker”->https://jesusbedtimestories.com/king-david-royal-rump-shaker/). Hallelujah! Praise the Lord! Thank you, Jesus! God is good!* 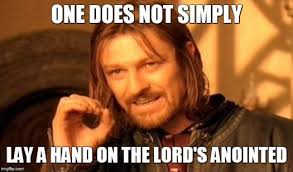