As I’ve mentioned a time or two before, God has a sense of humor (thank you, Jesus!). When we get too big for our britches, God has a way of bringing us back down to size (Operation Deflation is underway!). God loved us so much that he sent his son, our Lord and Savior, Jesus Christ, to die on the Cross for our sins; when Jesus died for us, he died for ALL of our imperfections-ignorance included. God, like a good parent, will put his children in check when they get out of line. This brings us the story of the Tower of Babel in the Bible.

In the 11th Chapter of Genesis, Noah’s descendants were living in the area of Mesopotamia, in Babylon. Everyone spoke the same language, and the population was growing larger by the second (just as our children seem to grow overnight! Make it stop! I just bought these clothes two weeks ago, and you’ve grown out of them ALREADY?! What do you think this is…the BANK?! Money doesn’t grow on trees! I have to buy new school clothes AGAIN! Haha). The Babylonians thought too highly of themselves (they were arrogant, prideful, and thought that the world revolved around them) and decided to build a mighty city with a tall tower to show how great they were (HAHAHA, amateurs.). Their mindset was as follows: 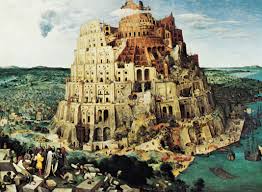 Genesis 11:4 (KJV): And they said, Go to, let us build us a city and a tower, whose top may reach unto heaven; and let us make us a name, lest we be scattered abroad upon the face of the whole earth.

Dawww, how cute! The Babylonians thought that they were going to build a tower that reached to Heaven, such that they would be like gods and wouldn’t need the one and only true God (the God of Abraham, Isaac, and Jacob, as well as the father of our Lord and Savior, Jesus Christ). They began to build the tower, but God, needing a good laugh, put a dent in their plans. When God saw how arrogant and cocky (cock-a-doodle-doo!) the Babylonians had become, he suddenly caused them to speak different languages, as they would no longer be able to understand each other, couldn’t communicate with each other on how to complete the tower and city, and would look goofier than a cactus in a three-piece suit (that cactus is SHARP!).

Once the Babylonians realized that they had messed with the wrong one (God didn’t play that! God was a G! Rough rider! Haha) and couldn’t communicate with each other, they quickly scattered to different parts of the world, and the city was left unfinished (cue Miley Cyrus: Wrecking Ball! Kids, please DON’T EVER listen to that song or watch the video. For goodness sake, take that Grade-A garbage off of the Internet! Haha). Given that the Babylonians had accidents on themselves (I sense warmer undies) and scattered to different parts of the world with different languages, this is why we have different languages today (SWERVE! You all didn’t see that coming! Did you?! Did you?! Haha)! We love learning different languages and hearing different accents, which God doesn’t mind, but the origin of different languages was the Babylonians having their egotistical heads so far up their own behinds, they were giving themselves colonoscopies (ask your dads what those are, kids. Haha). 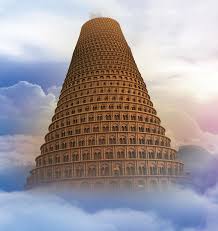 HAHAHAHA! God showed the Babylonians who’s boss! He made those McGoofies from McDonalds speak different languages and run away like ants at a Raid convention! God is in control, always has been in control, and always will be in control. Though he loves us and sent his son, Jesus Christ, to die for our sins, he deserves and expects our utmost love, respect, and reverence (Hallelujah! Praise the Lord! Thank you, Jesus! God is good!). Let us not make the mistake of thinking that we don’t need God, that we’re better than God, or that we are God-God will always get the last laugh (and our full attention). I’m ready for this remix, y’all! Put your spacesuits on, hop on your rocket ships, and let’s blast off! NOTE: I will be utilizing modern-day language, technology, and ways of living in this story, as we’re picturing this happening today.

*The Babylonians just finished watching Scarface and The Godfather on Spike TV, and suddenly think that they’re bad boys (cue the Cops theme song-Bad boys, bad boys, whatcha gonna do? Whatcha gonna do when we come for you). They have a large and growing population, they all speak the same language, and they think that they’re the best thing to ever happen to Mesopotamia (which is located in Babylon). As such, they want to build a huge city and tower-The Tower of Babel-to show how awesome they are-they don’t need God (look at this Kix commercial: moron tested, dummy approved)! We’ll see what God has to say about that.*

Bill the Babylonian: Babylonians are the BOMB! The world should bow down and worship us for being so great-we’re swimming in money (your little $2.65 doesn’t count), we’re the smartest people who ever lived (no, you’re actually just a dedicated dipstick), we’re responsible for all of the world’s greatest inventions (clown, y’all created a non-working, non-cooking Easy Bake Oven! Those brownies were TRASH! Sit it all the way down!), and everyone wants to be like us (someone slap this fool; he’s clearly dreaming. Haha jkjkjk Jesus is love).

Brittany the Babylonian: You are preaching to the choir, Bill! Hallelujah! Every guy wants to date me, and all of the girls hate me. I mean, look at me, I’m stunning. They should build a statue of me and put it in the center of every big city in the world (she doesn’t have time for the smaller cities)-everyone deserves to drool over how gorgeous I am. Of course, those losers can only dream of being as beautiful as I am, but everyone deserves to dream, right? 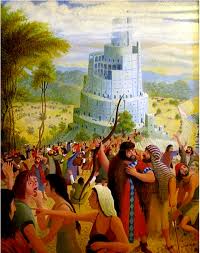 Brittany the Babylonian: You can say that again! I am visually gifted. Haha

Bob the Babylonian: Hey, guys! I have a great idea. Seeing as how we’re royally awesome and worlds better than any of these other scums of the earth, why don’t we build a huge city with a tower to Heaven? We don’t need God. We’re better than God could ever be. As a matter of fact, to the rest of the world, we ARE God.

Bridget the Babylonian: Yaaasss, Honey! We are God, we have all of the power, and this world needs to bow down and worship us (and worship the ground that we walk on!)! This is our throne! On your knees, peasants! Kiss our feet!

Brittany the Babylonian: Recognize our power!

Bill the Babylonian: Chant our names!

Bob the Babylonian: Shave our backs!

*Everyone suddenly stops and gives Bob the stank face. Shave our backs?! No one’s trying to be wandering through that wilderness for 40 years. Haha*

*Everyone keeps laughing like they’re a few fries short of a Happy Meal. I should chuck soda into their eyes. AHHHHHHH! IT BURNS! Haha jkjkjk YOU ALL DISGUST ME!!!!!*

Bill the Babylonian: Let’s get to work on this tower!

Everyone Else: Here! Here! Let’s do it!

Brittany the Babylonian: YES! As long as I don’t break a nail (why don’t I break your-I’m sorry. I’ll stop. Hahaha).

*The Babylonians begin working on the city and tower, but God is not pleased by how arrogant and prideful they are. They think that they’re better than God?! They have the audacity to call THEMSELVES God?! Lucy, you’ve got some ‘plaining to do! He decides to show them who’s boss; no one makes a mockery out of God and gets away with it!* 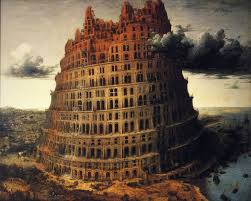 GOD ALMIGHTY: Behold, the people is one, and they have all one language; and this they begin to do: and now nothing will be restrained from them, which they have imagined to do. Go to, let us go down, and there confound their language, that they may not understand one another’s speech. So the Lord scattered them abroad from thence upon the face of all the earth: and they left off to build the city.

*HAHAHAHA! God changed all of their languages with the snap of his finger-they can no longer understand each other, can no longer laugh at Bob’s garbage jokes (he’s not funny. Haha), and can’t communicate with each other on how to finish the tower and city. Run away!!!!*

Bill the Babylonian: ¿Lo que acaba de suceder? ¡Ya no puedo entender a nadie! (Spanish for “What just happened? I can’t understand anyone anymore!”)

Brittany the Babylonian: Nein! Ich bin zu schön, als dass die Leute nicht verstehen könnten, was ich sage! Das ist eine Travestie! Was ist mit der Stadt, dem Turm und meiner Statue ??? !!!! (German for “No! I’m too beautiful for people to not be able to understand what I’m saying! This is a travesty! What about the city, the tower, and my statue???!!!!”)

Bridget the Babylonian: Би ээжийгээ хүсч байна! (Mongolian for “I want my Mommy!”)

With this, the Babylonians ran away to different parts of the world (those clowns should have joined the circus-Bob’s back makes him look like a wild orangutan. Haha); not only were the city and Tower of Babel never completed, but due to the Babylonians’ supreme arrogance (and God teaching them a lesson), this is the reason why we have different languages today (mind BLOWN!). I love learning about different people and their cultures (especially their languages), but now knowing how all of this came about, we can learn about one another with a chuckle and a smile. Haha I love you all, God bless you all, and I’ll see you all on the next one! 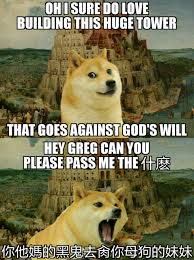