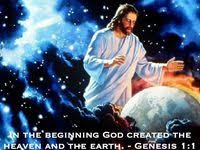 Calling all artists! Calling all artists! I don’t know about any of you, but I love to create things-pictures/paintings, songs, unusual meals that have no business tasting good, but are absolutely DELICIOUS (Oreo omelettes for everyone! Haha)! We often find ourselves amazed by the world’s inventions (smart phones, smart TVs, smart cars, smart alecks (we’re happy about those? Haha), etc.), but none of these things could have been invented if the world hadn’t first been created. This brings us to the story of God creating the world in the Bible.

To begin, I know that some people believe in the Big Bang Theory (the idea that a big explosion took place billions of years ago, atoms suddenly appeared, and those atoms created everything) and/or the theory of Evolution (the idea that we all evolved from apes-ooh, ooh, ahh, ahhh!). I fully believe that God Almighty created the world and everything in it in six days; he said “let there be,” and BANG, there it was (Woop, there it is! Woop, there it is!)! God’s creation has certainly EVOLVED over the years-we now have clothes (“An Apple A Day Won’t Keep Jesus Away”->https://jesusbedtimestories.com/an-apple-a-day-wont-keep-jesus-away/), have nice houses and cars (“Giddy Up, Horsey! Or Not.”->https://jesusbedtimestories.com/giddy-up-horsey-or-not/), have technology up the wazoo (that would hurt. Haha), and even have health insurance (You’re fine! Just run it off! I said just run it off! Haha). God has blessed us with a beautiful world (we’ve been buttheads about taking care of it, though), and as such, it only makes sense that we explore just how God created it.

In the first two chapters of Genesis (the first book of the Bible, y’all! Mommy, I get to be first!), God created the heavens and the earth (God has always been around, y’all; God the Father (God Almighty), God the Son (Jesus Christ), and God the Holy Spirit (erm, Holy Spirit. Haha) have been alive forever and ever, and always will be. That’s just how they roll! What’s up, Christian (retired pro wrestler)?! Haha). On Day 1, God created the earth, which was dark and didn’t have anything in it (just a big black ball of NOTHING), and God decided to make it pretty and colorful (find my Sharpies and Magic Markers! Haha). God said “let there be light,” and the light suddenly appeared; he called the light, Day, and the darkness, Night (no wonder I’m as blind as a bat when I go potty at 11:30pm). He also created water; let’s go paddle boarding, bro! Right on! Haha. God thought this was a good start to his world, and this ended Day 1. 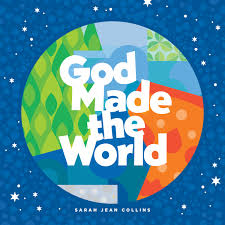 On Day 2, God created the sky, outer space, and divided the waters that he had created the previous day. God wanted to create space between the waters, as he didn’t want them arguing over who was cooler (my hair is more wavy! I have smoother dance moves! My flow (the sea thinks it’s a rapper again. Facepalm) is better! I’m so cool, I’m ICE COLD (maybe in Alaska or Antarctica. Haha). God also created Heaven on Day 2 -he likes great views of the water as well (look at my magnificent creation! It’s so beautiful! Why yes, yes it is. Haha). He sat back, got nice and comfortable, and called it a day. Haha

On Day 3, God told the waters (which were running wild like Albert Einstein’s hair-if you’re so smart, why didn’t you invent a comb, Bertie?! Haha jkjkjk) to gather together in bunches, creating seas, oceans, lakes and rivers. God realized that he didn’t want his world to be one big, wet wonderland, and as such, he created dry land (God discovered America! Haha). No one wants to look at bare land (that’s as entertaining as watching paint dry. Haha), and as such, God created grass, plant/flower seeds (Frozen remix! Let it grow! Let it growwwwwww!), as well as fruit trees (who wants peaches?! Please excuse my hungry behind, y’all; I need peach cobbler in my life right now. Haha). God ate a juicy pear and shut down shop for the day.

On Day 4, God created the sun, moon and stars, and placed them in the sky; he wanted us to see when we were about to run the red light or run into a light pole (would you slow down?! The ice cream man will still be there for another 15 minutes! You’ll get your strawberry shortcake bar! GOSH (Napoleon Dynamite reference. Haha)). Speaking of running into things, on Day 5, God created all animals that live in water (whales, dolphins, sea turtles, jellyfish, etc.), as well as all animals that fly (look at the pretty birdie, Daddy! Look at the pretty birdie!). God wanted his world to be full of animals (sit down, Animal Kingdom! Haha), so he instructed the animals to multiply (baby animals! Bow chicka wow-wow. Haha). God was tired of ducking bird droppings, and decided to rest for the night. Haha. 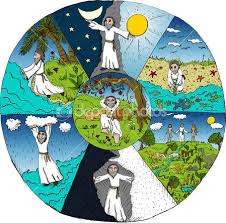 On Day 6, God created all land animals (everything from cats to dogs to horses to hamsters to giraffes! Yes, giraffes; he meant for us to be able to run the 100 yard dash on just their necks alone! Haha), including HUMANS! Yes! Jackpot! That’s the part that we wanted to get to! On the sixth day of creation, God created the first human beings in his own image (he meant for us to look like him in how we loved, served, cared for, and protected one another). He started by creating the first man, Adam (God created him from the dust and breathed life into his body, making him alive), and while Adam was asleep (he knew that men needed help! Haha), he took one of Adam’s ribs and created the first woman, Eve. God wanted Adam and Eve to take care of his new world-the beautiful Garden of Eden (where all of the plants, animals, water, and food were), and to be in charge of all of the animals (we’re his favorite creation, y’all! YAASSSSSSS!!!! Haha). As with the animals, God told Adam and Eve to multiply (babies! Cue the slow music! Haha jkjkjk…kind of), as he wanted the world to be full of humans, animals, and buzzing with activity! God gave Adam and Eve everything that they’d need-food, water, fresh air, plenty of land, all of the animals that they could dream of, and each other (hey, sugarmuffin. Haha). What a beautiful world!

God finished creating the world on Day 6 (whew! That was a lot of work! Haha), and on the 7th day, God rested. This is the reason why we have the Sabbath Day (a day to rest and FULLY devote ourselves to God the Father and our Lord and Savior, Jesus Christ-prayer, reading our Bibles, going to a Bible believing, Bible teaching church, etc.), as God wants us to take a day to rest from our work, just as he did. Given that today’s story deals with God creating the world, I cannot do a modern-day remix; there would be no such thing as “modern” if the world hadn’t already been created. Haha As such, I have included an excellent video from The Saddleback Kids, further describing how God created the world. Enjoy!

WOW! God is the man with a capital MAN! He created the world in six days, rested on the seventh day, and gave us so many gifts that keep on giving (like this Kraft macaroni and cheese, baby! YASSSS, God! The blue box blues! Haha). I hope that you all enjoyed this post (the modern-day remixes shall return tomorrow!)! I love you all, God bless you all, and I’ll see you all on the next one! 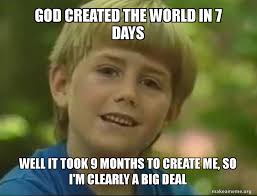