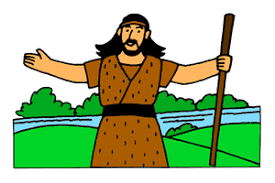 Why do some women feel that they can get away with bloody murder (both literally and figuratively) because of their looks?! I mean, really, your floaty fun bags are only going to take you so far, Honey. Whether you have long hair, pretty eyes, the cutest dimples I’ve ever seen (I could just pinch your widdle cheeks! Wait, you’re not a baby. That’s creepy. Haha), or the face of an angel (that acne is well under control, huh? Haha jkjkjk I can’t talk-my face feels like one of those Braille menus from McDonalds. Haha), sin is sin (bad things that we say, do, don’t do, and/or think-God is not pleased) and wrong is wrong (almost as wrong as those SUGARLESS donuts from Krispy Kreme! Why not just give me a glazed piece of wax paper to eat?! Haha jkjkjk), and you should not be able to get away with it (you may be able to fool people, but you’ll never be able to fool God). In light of today being Day#6 of my “Are These Women Crazy?!” series, we will now explore the death of John the Baptist in the Bible.

If some of you will recall from an earlier post, Waterworks! John the Baptist Baptizes Jesus, John the Baptist was both Jesus’s blood cousin (they were born 6 months apart-Johnny edged him out. Haha) and the man who baptized Jesus Christ in the Jordan River (how cool is it to baptize your cuz, who just happens to be the Lord and Savior of the world?! Wet willy! Haha). Many people consider John the Baptist to be the forerunner to (prelude to) Jesus Christ, as he warned the people to repent of (turn away from) their sins (ask God to forgive them of their sins and help them to stop sinning), and he preached about the Kingdom of God before Jesus began his three-year earthly ministry; once Jesus stepped on the scene (began his ministry), he also preached repentance and taught the people about the Kingdom of God. I see a family resemblance! Haha. 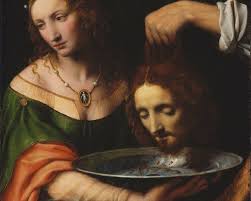 In the books of Matthew and Mark (the 14th Chapter of Matthew and the 6th Chapter of Mark), we see that John the Baptist is in prison. Our man was thrown into jail for being against the marriage of Herod Antipas (ruler of Galilee and Perea) and Herodias (why are their names so similar? Haha). Here’s the skinny: Herodias was the granddaughter of Herod the Great (king of the Jews in the Roman Empire), and being the nasty, bottom-feeding, power-hungry, trifling Trudy that she was, she married two of her uncles, Herod Philip I and Herod Antipas (ewwwwwwwwwww! I should backhand all three of them-Three’s Company, Hood Edition (rest in peace, John Ritter)!).

As if it wasn’t RIDICULOUS enough that this clown married her own uncles (and their trash-bag behinds went along with it!), Herod Antipas had divorced his previous wife and unlawfully married Herodias, stealing her from his brother, Herod Philip I (this entire dysfunctional family belongs on Jerry Springer, y’all! SMH). John the Baptist, being the man of God that he was, wasn’t going for that foolishness-he disagreed with Herod Antipas and Herodias’s marriage and openly voiced his disapproval of (and disgust with) their relationship. Since the powers that be were sensitive snowflakes who couldn’t handle criticism, they put John the Baptist in jail for having a backbone and standing on the Word of God (no gummy bear Christians here!).

Herodias (that loose wet wipe) had a daughter, Salome (she was Herod Antipas’s stepdaughter), who was a very good dancer (Jenny from the block ain’t got NUTHIN’ on her! Haha). On Herod Antipas’s birthday (like anyone cares about his birthday. Haha), Salome danced for him and his guests; Herod was so pleased with his stepdaughter’s dancing that he promised to give her whatever her heart desired (can I punch a hole through his throat, please?! He’s a creep! I’m sorry. Please forgive me, Lord. Say no to violence, kids. Jesus is love. Haha). Herodias, as a way to get revenge on John the Baptist for criticizing her marriage to her UNCLE, Herod Antipas (I want to snatch her head so badly right now, y’all! It will be unbeWEAVEable! Haha jkjkjk), persuaded her daughter to ask for John the Baptist’s head on a platter. 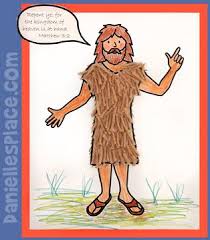 The apple of stupid unfortunately didn’t fall far from the tree, as Salome agreed to this IDIOTIC request-she told Herod that she wanted John the Baptist’s decapitated head on a platter, as if this was supposed to be some grand birthday present (how about I shoot you out of a cannon for his birthday? Oh, look! It’s a bird! It’s a plane! It’s your idiot stepdaughter going face first into a tree! Haha). Although Herod hated this request and didn’t want to kill John the Baptist in this way, this spineless Twizzler was afraid to look bad (i.e. look weak) in front of his guests, and thus, reluctantly agreed to behead John the Baptist (WHYYY???????!!!!! He and Pontius Pilate (the Roman governor who disagreed with crucifying Jesus Christ, but nonetheless allowed it to happen) clearly read from the same book of BULL-shut your mouth! Both Herod and Pontius were too afraid of the people to go against RIDICULOUSLY STUPID REQUESTS!!!!! I’ll simmer down, though (stifle yourself, Edith!!!), as God’s will was going to be done, no matter what (especially in regard to Jesus dying on the Cross for our sins)).

As such, John the Baptist was beheaded in the prison of Machaerus, his head was brought to Salome (who gave it to her LUNATIC mother, Herodias), Jesus’s disciples buried John the Baptist’s body (after hearing what had happened to him), and they told Jesus what had just happened to his cousin. SPOILER ALERT! Jesus was NOT happy about this, and he’s going to get his revenge, Boy! Haha.

Wow! Herodias is a flaming tub of scum (I’m sorry. I just had to get that off of my chest. Haha). You decided to be a little hoochie mama, and John the Baptist had to die for it?! No worries, though; God and righteousness will always win in the end (thank you, Jesus!). I’ve been dreaming about this modern-day remix, y’all (I woke up on the floor, crust in my eyes, drool down both sides of my chin (looking like Dracula! AHHHH! THE HORROR!!! Haha), hair looking like Buckwheat, and everything! Haha)! Without further ado, let’s get to remixing! NOTE: I will be utilizing modern day language, technology, and ways of living in this story, as we’re picturing this happening today. 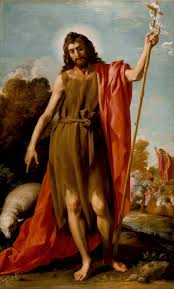 *John the Baptist (Jesus’s cousin and the man who baptized Jesus in the Jordan River) has been thrown in jail for openly opposing the marriage of Herod Antipas (ruler of Galilee and Perea) and Herodias (nasty, golddigging MANIAC!). Herod and Herodias are uncle and niece (AWWWW, HECKY NAWWWWWWW!!!!), and 1) this is the second uncle that Herodias has married (the first was her uncle Herod Philip I); 2) Herod Antipas unlawfully married his NIECE by divorcing his wife and snatching Herodias, his NIECE, from his BROTHER, Herod Philip I (this bat-crap crazy family belongs on Jerry Springer, y’all! You all DISGUST me!!!!! Haha).

John the Baptist, being the man of God (and predecessor to his cousin, Jesus Christ) that he was, wasn’t going for this foolishness and let everyone know what he thought (my kind of guy! Haha). The government (especially Herod Antipas and Herodias themselves) was made up of extra sugary pixie sticks (SNOWFLAKES! Haha), and since they couldn’t handle criticism, they had John the Baptist arrested outside of Wal-Mart (on John’s day off too-he was a hardworking stock boy, y’all! Haha Can’t a man buy his frozen pizza and ceiling fan in peace?! Haha) and thrown in jail (and no one had the money to bail him out after the 4th of July! WEAK! Haha jkjkjk).

Today is Herod’s birthday, and Herodias (that butt-backwards JAMOKE!) is just looking for a way to get back at John the Baptist for calling her out on her nonsense (you deserve the criticism, clown!).* 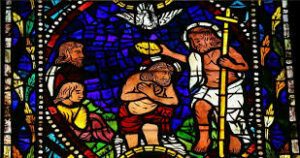 Herod Antipas (to his wife, his NIECE (dipstick!), Herodias): Thank you so much, Baby! I love you more, love you more, love you moreeeeee! I’m so excited! You always buy me the BEST gifts (so she bought you a $150,000 Ferrari with TVs and a waterfall in the back-BIG DEAL, LOSER! Haha)! How much did you spend this year (with your THIRSTY behind! Calm down!)?!

*Herodias convinces her daughter, Salome (Herod Antipas’s stepdaughter) to dance for Herod and his guests at his surprise birthday party. That girl can move, y’all! She won 1st place on Britain’s Got Talent with her hip-hop dance routine! YOU GO, GIRL!!!! Haha.*

-Salome dances for her stepdad and his guests, and Herod ABSOLUTELY LOVES IT, y’all! He’s up jumping, screaming, clapping, and acting like a 12 year old girl at a Jojo Siwa concert (don’t worry! I won’t make fun of Jojo Siwa…today. Haha). He can’t help but to embarrass himself; he’s a grade-A circus monkey. Haha.

Salome: Thank you so much, Daddy! I love you! 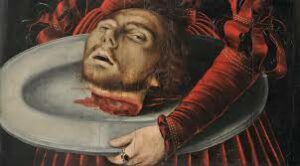 Herod Antipas: I love you more, Sweetie! Listen, you did such a good job that I want to do something nice for you. Whatever you want, Princess, it’s yours! Just say the word, and Daddy will get it for you!

Salome: OH MY GOODNESS!!!! Thank you, Daddy! Are you serious right now? Like forreal, forreal? Is Ashton Kutcher hiding in the bushes?! Am I being Punk’d right now?!

Herod Antipas: I’m so serious, Sweetheart! You’re not being Punk’d right now, Ashton isn’t hiding in the bushes (he better not be! Haha), and whatever you want, it’s yours!

Salome: YEEEEEEEEEEEEEEE!!!!!!!! THANK YOU, DADDY! Can I think about it for a minute?

Herod Antipas: You take all of the time that you need, Princess.

*Herodias hears everything, quickly pulls her daughter to the side, and sinks her evil claws into her (WITCH!). Herodias is still salty about John the Baptist calling her out on her foolishness (that backwoods union she calls a marriage), and as such, she convinces Salome to ask Herod for John the Baptist’s head on a platter (some parts of the world are completely nuts, and they do still try to kill people this way). Salome was drowning in the stupid juice, actually agrees to ask her stepfather for this, and proceeds to spew that hot garbage from her diarrhea hole (I mean, her mouth. Haha). * 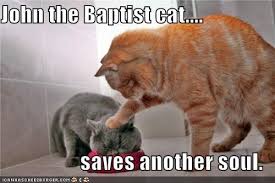 Salome: Daddy, I know what I want now.

Salome: I want John the Baptist’s head on a platter!

*Herod proceeds to sign an executive order to have John the Baptist beheaded, and John the Baptist is beheaded in the prison of Machaerus. The wards bring John’s decapitated head to Salome, Salome gives it to her mother (can I push Herodias off of a cliff?! Please?! Please?! Haha), Jesus’s disciples find out what has happened and bury John’s body, and they proceed to tell Jesus what these imbeciles have just done to his cousin. Jesus isn’t laughing, y’all (that’s a holy ticking off, if there ever was one!)! God will take care of those toe rags! Good will always trump evil! Hallelujah!*

I hope that you all enjoyed today’s story, y’all! I love you all, God bless you all, and I’ll see you all on the next one! 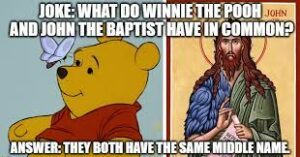