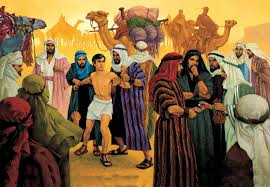 Attention, everyone! Attention! THIS IS A PUBLIC SERVICE ANNOUNCEMENT! For those of you who have the divine honor of being parents to two or more children (oh, the joy! I’m not being a complete smart aleck this time…just a partial one. Haha), you all know the importance of loving and treating all of your children the same. Sure, one child may be a little angel (Red Bull! It gives you wings! Just kidding. Less junk, more Jesus, kids! Haha), while another may act like something out of Godzilla, Frankenstein, or Chucky (hide the good china! Haha jkjk I need to behave. Haha).

Regardless of whether your children make you proud or make you forget your Sunday School language (don’t act like y’all don’t know what I’m talking about! Grace! Jesus loves you. Haha), it’s crucial that you love, respect, and treat your children equally. God blessed us (Haha, “us.” My single, non-child-having behind is sitting over here pretending like I know a lick about being a parent. I’m a funny clown. Haha) with children (Psalm 127:3 (KJV) tells us that “Lo, children are an heritage of the Lord: and the fruit of the womb is his reward”), and he has tasked us with loving them, protecting them, and raising them/teaching them-we are to teach them to love God (through the blood of our Lord and Savior, Jesus Christ), love themselves (not too much, though. That’s kinda creepy. Just saying. Haha), and love one another.

We parents must lead by example, treating our children the way we want (and expect) them to treat one another. No funny business, parents! When we play favorites with our children, we damage them. Some children may feel as if they’re less loved than their brothers or sisters, causing anger, bitterness, and resentment toward both their siblings and their trifling parents (I sure did say “trifling!” I call it how I see it! Haha). Such thinking can cause a child to act out in “less than pleasing” ways, whether it be acting out in school, hanging out with the wrong crowd, fighting their parents and siblings at home, etc. (it’s UFC every day in my house! Get over here, Anderson Silva! Haha jkjkjk). 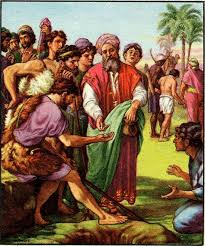 While most children will deal with their anger in “normal” ways-tripping their siblings down the stairs, shrinking their clothes or athletic cups in the dryer, putting itching powder in one another’s beds, putting one another in a headlock in front of their prom dates, etc.-some children take their bitterness too far and try their darndest to hurt (or even kill) their siblings. This brings us to the story of Joseph’s brothers selling him into slavery in the Bible.

In the 37th Chapter of Genesis, here’s the skinny (that’s slang for “here’s what’s going on.” Haha). Jacob (we remember Jacob! His mother, Rebekah, favored him over Jacob’s twin brother, Esau, and they worked together to steal Esau’s birthright from their father, Isaac-“Jacob: The Blessing Bandit!”) has 13 children (12 boys and 1 girl), and when it comes to the 12 boys, Jacob loves Joseph (a bright eyed 17-year-old) the most.

Jacob doesn’t hide the fact that he loves Joseph more than his other sons, as he makes Joseph a fancy coat of many colors (looking like the “Nature Boy,” Ric Flair, in that goofy Skittles commercial-Skittles, taste the rainbow! WOOOOOOO!!!!!), and treats him (Joseph) like his (Jacob’s) pride and joy (Joseph wasn’t even his youngest son, y’all! Jacob doesn’t even know how to be a moron correctly! Haha). Joseph’s other brothers hated Joseph for this (why aren’t you all angry with Jacob?! He’s the one being a favorites-playing imbecile!), but things didn’t stop there.

Joseph (who had admittedly become a cocky punk from his father’s unfair treatment of him (unfair compared to how Jacob treated his other sons) had a dream (a dream from God Almighty himself) that he would become a ruler, and that his family, his father and brothers included, the sun, the moon, and the stars, would bow down and worship him. 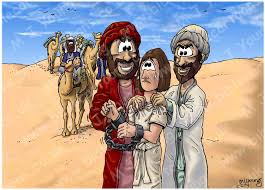 HOLD UP! WAIT A MINUTE! Let me get this straight! You mean to tell me that Dad loves that little weasel, Joe, more than he loves my brothers and me, Joe gets that stupid Starburst coat and all of this special treatment, AND we’re going to have to bow down to and worship him when we get older?! Is this a sick joke?! Am I being PUNK’d right now (where are you, Ashton Kutcher?! Haha)?!

As Joe’s bros went to feed their father’s flock in Shechem, Joseph soon came looking for them (hey! Wait up, guys!). As Joe’s brothers saw him coming near them, and unbeknownst to Joe, his brothers had made a plan to kill Joseph (NOOOOOOOOO! I know that Joe’s a little conceited corn flake, but don’t kill him! God can change him! NOOOOOOOOOO!). Joe’s bros had planned on killing him, dropping his lifeless body into a pit, and then they’d lie and tell their father that an evil beast had eaten Joseph (what beast wants to eat that Justin Bieber look-a-like?! I’m sorry! I need to stop. Haha).

Joseph’s oldest brother (as well as Jacob’s oldest child), Reuben, convinced his younger brothers not to kill Joseph (yes!!!!). Let’s not throw a parade for Reuben just yet. Although he successfully talked his brothers out of killing Joseph, he convinced them to instead strip Joseph of all of his belongings and throw him into a waterless pit alive…while they had an outdoor picnic (gosh darnet, Reuben! Be a big brother! We all get on one another’s nerves sometimes! We should throw YOU into a pit!). 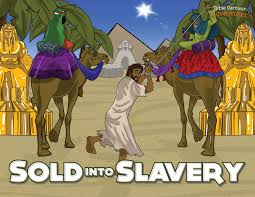 As a group of Ishmeelites came down the pathway on their camels (carrying spicery, balm, and myrrh to Egypt), another of Joseph’s brothers, Judah, suggested that they sell Joseph into slavery-we can get rid of him, we’ll never have to see him again (or so they think), he’ll be out of our hair and lives forever, and Dad can start loving us more!

Guess what, everyone?! These flaming idiots thought that this was a GREAT idea! Let’s be cruel colostomy bags and sell our brother into slavery! There’s no telling what type of unspeakable abuse he’ll endure, but because we’re spineless snowflakes and are afraid to confront Dad about his favoritism, we’ll just get rid of Joey! YAY (IDIOTS!!!!!)! Since Joseph’s brothers had clearly consumed the moron’s milk and stupid juice with their breakfasts that morning, when the Midianite merchantmen (they’re businessmen, y’all! They’re trying to make that money!) approached them, they quickly stopped them and sold Joseph into slavery for twenty pieces of silver (that’s the equivalent of $200 today. Those cruel, cheap nimrods!).

The Midianites took Joseph captive, took him with them to Egypt, and Joe’s bros proceeded to deceive (lie to!) their father. Reuben and the Buttwipes, I mean, Reuben and his younger brothers, proceeded to kill a baby goat, dip Joseph’s coat in the goat’s blood, they returned home with Joseph’s coat, and they gave it to Jacob, pretending like they didn’t know what had just happened to Joseph.

Jacob’s (that loser’s) heart sunk, as he recognized Joseph’s coat and assumed that his favorite son had been eaten by an evil beast (Jacob assumed that his son had been “torn into pieces.” That’s not exactly the type of visual you want to have of your child. Haha). As such, Jacob tore his clothes, put on sackcloth, and mourned Joseph (thinking that he was dead) for many days. Genesis 37:34-35 (KJV) note the following: 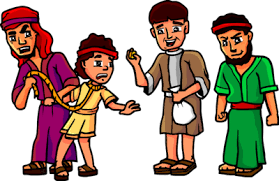 Genesis 37:34-35 (KJV)-Then Jacob tore his clothes, put on sackcloth and mourned for his son many days. All his sons and daughters came to comfort him, but he refused to be comforted. “No,” he said, “I will continue to mourn until I join my son in the grave.” So his father wept for him.

Jacob was distraught over the presumed death of Joseph, and he would not stop crying for Joseph until he (Jacob) was dead and with Joseph in the grave. WOW! For a favorites-playing jamoke, Jacob sure did wear his heart on his sleeve, didn’t he (please forgive me, Lord! Where’s my compassion?! Haha. Please take the wheel, Jesus! I know that I’m crazy and need help. Haha)?

Chapter 37 ends with the Midianites selling Joseph into slavery: he was sold to Potiphar, one of Pharaoh’s (Egypt’s ruler’s) officials and the captain of the guard.

Though Genesis 37 ends on a somber note, never fear! This is not where the story ends! In my next post, we will continue with Part 2 of this story, which has its’ fair share of twists, turns, surprises, and a VERY HAPPY ending (thank you, Jesus!)! Given that slavery is nothing to joke about, I will not do a modern-day remix for this part of the story. 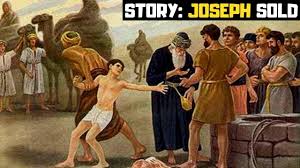 I can’t leave you all hanging, though (that would be so rude of me! In the words of Stephanie Tanner from Full House, “how rude!”)! I have included a brief clip from the animated movie, Joseph: King of Dreams (2000) (directly from the Movieclips’ YouTube channel), showing the very moment that Joseph’s brothers sold him into slavery. If you all feel the need to punch a hole through the T.V. set, throw Uncle Billy’s casserole out the window (it’s “delicious!” Haha), and punt Fluffy (the stuffed animal, not the dog! Haha) through the front door, so be it! I will send you all a voucher to replace the T.V. (I don’t have that much money. Haha)! 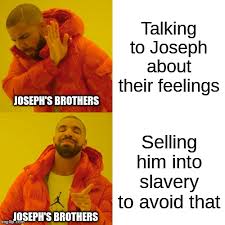