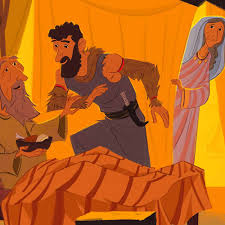 Calling all parents! Calling all parents! For those of you who have children (I don’t have any snotty-nosed heathens, I mean, precious little angels. Haha), particularly those of you with more than one child (God bless you all! It’s Jurassic Park, George of the Jungle and Tarzan every day in your houses, yet y’all haven’t pulled your hair out or chucked your little bundles of joy out the window yet! Jesus loves you! Haha), you try to love all of your children the same.

As parents, you love (or at least should love) all of your children equally-you don’t (or at least shouldn’t) have “favorites.” Sure, there may be times when you “like” certain children more than others-especially when certain ones start running that mouth (with more lip than Jay-Z and a Botox patient combined; my gosh, that’s a lot of lip! Looking like a bloated orangutan! Ooh-ooh! Aah-aah! Haha)-, but you must hide those feelings (and ask God to forgive you for having those feelings), put your pageant smile on, and love all of your little ingrates (I mean, lovely children!) the same. Haha.

What happens, however, when a parent makes it a little too obvious that he or she favors one child over the other (TRIFLING!!!! Haha)? This brings us to today’s Bible story (settle down! I know that this is the moment you’ve all been waiting for! Haha). Without further ado, I present to you all, the dysfunctional story of Isaac, Rebekah, Jacob and Esau. 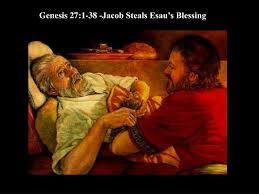 In the 27th Chapter of Genesis, Isaac (Abraham and Sarah’s only son; Abraham is known as the “Father of the Israelites.” We’ll visit Abraham in a later post. Haha) is a blind, weak, dying 137 year old man (people used to live much longer in Bible days; our disgusting sin ruined that for us. Way to go, us! Haha. Just like Orange is the New Black, and 40 is the new 20, 137 is the new 100! Isaac was a spring chicken! Haha). Isaac knew that he was dying, and as such, he wanted to pass all of his belongings to his firstborn son, Esau (unlike nowadays, where all children can take a proportional share of their parent’s estate at death, in those days, the oldest son/child took his or her parent’s entire estate. NOT fair! Haha).

There was just one problem with this: Isaac and his wife, Rebekah, had two twin sons-Esau and Jacob (Esau came out first. Haha)-and Rebekah wanted Jacob to inherit his father’s estate (AW, SNAP! Isaac & Rebekah were playing favorites, y’all! I smell a family feud coming on (If you smell what the Tray is cooking! Welcome to Family Feud!)-get your popcorn and soda ready! We’re getting this pay-per-view quality fight absolutely FREE and with front row seats! Haha.

As Isaac asked Esau to get, prepare and bring one of his favorite meat dishes to him (venison, which is “delicious” elk or deer meat. Haha), Rebekah overheard the conversation (she was eavesdropping, y’all! Stop giving nosy women a bad name, you BAT! Haha) and quickly told Jacob to get two baby goats to fix for Isaac (who the FLIP eats goat?! Haha). Rebekah told Jacob that she would cook and season the meat, just like her man likes it (yeah, alright), and she would have Jacob bring it to Isaac, so that Isaac would bless JACOB, not ESAU (Rebekah is trifling, y’all! How are you going to do your “older” twin like that?! You pushed his big head out of your womb first! Haha). 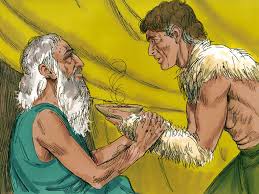 Jacob didn’t think that the “okie doke” would work-Esau is a hairy man (that man feels like Chewbacca, y’all!) while Jacob is a smooth man (he has a 12-year-old Justin Bieber face. Haha). Seeing as how Isaac is blind, he would surely touch the person who delivered his food to determine whom it was (he knows his children!); Jacob doesn’t want to be cursed! Rebekah shows how much of a raging lunatic she is, telling her son that SHE will take whatever curse comes from tricking her husband (are you sure about that, Rebekah? You don’t know what you’re getting yourself into!); you just be a good boy and do what Mommy tells you to do. Haha.

Jacob obeys his mother, brings her two “delicious” baby goats, Rebekah cooks the meat for Isaac, she steals some of Esau’s clothes (thief!), she has Jacob put Esau’s clothes on (why stop there, Rebekah?! You’ve already stolen Esau’s clothes and are attempting to steal his blessing! Why don’t you just steal his heart, hopes and dreams while you’re at it?! You’re a terrible mother! Haha), and has Jacob bring the cooked meat to his father. Right before Jacob delivers the meat, Rebekah puts goat skins on Jacob’s hands and neck to make him feel hairy like Esau (was Esau a man or a hairy wildebeest?!)-Isaac can’t see anything, so he’ll never know the difference (just so wrong! Haha).

As such, Jacob goes to Isaac’s room, Isaac asks who is before him, Jacob lies like a rug and says that he’s Esau (they must have sounded alike, because otherwise, Isaac would’ve been able to tell that that Willy Wonka & The Chocolate Factory sounding voice wasn’t Esau’s. Haha), he notes that he has prepared and brought the meat as Isaac requested, and he prays that his father will bless him (you lying piece of garbage! I should punt you in the head right now, but that’s not Christ like. Haha). Isaac asked Jacob how he prepared the meat so quickly, and Jacob said that God brought the meat to him (don’t try to blame God for your foolishness! God didn’t have anything to do with you and your mother being sneaky scum of the earth!). 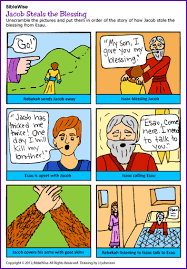 Isaac next asked Jacob to come near him so that he could touch him-Isaac was smart enough to know that people would try to use his blindness against him.

When Jacob approached his father, Isaac said that the voice sounded like Jacob’s (I guess their voices didn’t sound alike. Haha), but the hands (which were covered in the goat skins that Rebekah superglued to Jacob’s hands. Smh) felt like Esau’s. Isaac didn’t question things any further, however (WHY THE FLIP NOT?!?!?!?!), and felt that the hands told the whole story-since the hands feel like Esau’s hairy, Chewbacca-channeling hands, this must be Esau (NOOOOOOOOO!!!!!!!!). As such, Isaac ignorantly blessed Jacob instead of Esau, he ate, drank, and tried to be merry, Jacob kissed his father (Isaac noted that his son smelled like a field that the Lord had blessed…that’s a little weird, but okay. Haha), and Isaac blessed Jacob.

Isaac passed his entire estate to Jacob (still thinking it was Esau)-the Israelites would bow down and worship Jacob (as their second-rate “lord,” but not as God); Jacob’s entire family, including his brother, would serve him; blessed be anyone who blesses Jacob; cursed be anyone who curses Jacob. As soon as Isaac had blessed Jacob, Esau came in from his hunting-he had the meat that his father wanted! Esau cooked the meat (I love a man who cooks! Haha), brought it to his father, Isaac asked who was before him, Esau identified himself, and he humbly asked his father to bless him.

WAIT A MINUTE! Isaac is confused (did you just figure that out today, Sunshine? Haha). Isaac asked who the fellow (you mean BUSTER!) was that just brought him venison to eat-the light-bulb finally went off in Isaac’s head! Jacob stole Esau’s blessing (beat your brother up, Esau! He deserves a royal wedgie of EPIC proportions! I’ll help you out! I’ll stick my foot so far up Jacob’s backside that he’ll be throwing up my toenail polish as blood! Haha)! Esau was upset, began to cry, and begged his father to bless him (it should have been his blessing to begin with!). Isaac could not take back his blessing upon Jacob (Nonsense! Yes you can! You’re the father! He’s the product of your loins and underwater acrobatics! Haha), but instead told him that he’d always have a home, he’d always have plenty of food to eat (but he’s forced to bow down to his mischievous twin brother now!), and he’d be next in power after Jacob croaked. 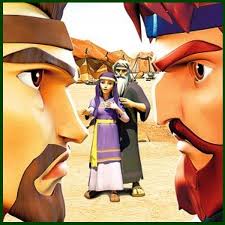 As such, Esau was furious with Jacob, he vowed to kill that little dwerp (while mourning their father’s imminent death), Rebekah the Backstabber heard everything (she’s such a witch! Remember, everyone, Witches Get Stitches!), and she told Jacob to leave immediately and stay with her brother, Laban, in Haran. She wanted Jacob to stay away long enough for Esau to calm down (HAHAHAHAHAHAHA! Calm down! I helped your brother to steal your entire livelihood away, and you have to bow down and worship him now, but you calm down this instant, young man!). Don’t worry, Jacob; Mommy will come and get you once all of this blows over. Here’s Bobo the Blankie, your teddy bear and some warm milk. You run along now!

With this, Jacob fled to Haran to live with Laban, Esau despised his brother (though we must forgive one another of our sins if we want God to forgive us of our sins; I know that it’s hard to do at times (it may seem nearly impossible to do at times), but bitterness is not worth missing Heaven (and going to Hell) over!), Rebekah worried about the type of woman that Jacob would marry (we don’t care about that right now, you Jezebel (MORON!)! You just stabbed your firstborn son in the back!), and this dysfunctional family proved that stupidity has been in existence since the beginning of time. Haha.

Though the Bible doesn’t specify how God punished Rebekah and Jacob for stealing Esau’s birthright (blessing) away, I know that God dealt with them accordingly-God doesn’t like ugly, he always avenges the wrongs done to his children, and he always gets the last laugh (Hallelujah! Praise the Lord! Thank you, Jesus! God is good!). Likewise, when Jacob finally returned home…20 years later (Esau was REALLY angry. Haha), he apologized to Esau, gave him a blessing (in the form of hundreds of goats, camels, sheep and donkeys), Jacob bowed down to Esau, and Jacob called Esau his “lord.” Note, I’ve used a lowercase “l” in this instance, as the only “Lord” (with a capital “L”) is our Lord and Savior (and God’s son), Jesus Christ, whom God sent to die on the Cross for our sins. 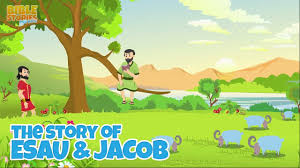 Jacob better have apologized, otherwise he would’ve gotten smacked up from the back up (you better recognize, boy!)! Haha. This gesture didn’t change the fact that Isaac had given his blessing to Jacob (by mistake, of course), but it at least kept Esau from killing Jacob and using him as a Christmas ornament. We’ll take it. Haha.

Given that today’s summary was rather long (you’ve got that right, Carletta! We were wondering when you were going to stop RAMBLING ON AND ON! It’s not like we have lives or things to do. Haha), I will not do a modern-day remix of it (we’d be here until next winter. Haha). I can’t leave my Peeps hanging, however! As such, I have included a wonderful video from Crossroads Kids’ Club, entitled “God’s Story; Jacob and Esau,” that outlines the Isaac-Rebekah-Esau-Jacob debacle beautifully (it’s such a cute cartoon!)!

I hope that you all enjoyed today’s post! I love you all, God bless you all, and I’ll see you all on the next one! 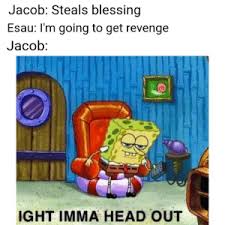 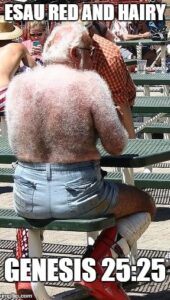 6 thoughts on “Jacob: The Blessing Bandit!”